Gidget Pitches In To Save Our Surf 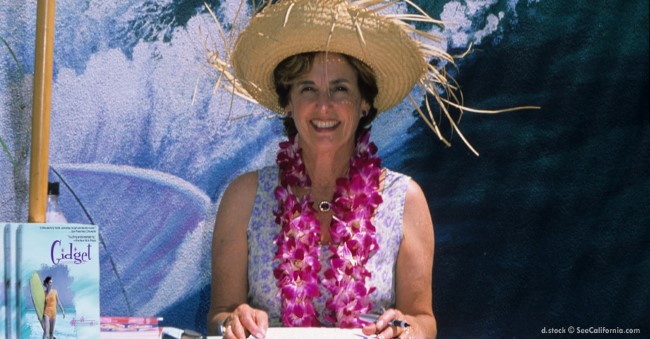 A beach festival in Santa Monica with a celebrity surfathon to benefit special causes relating to the ocean, water quality, beaches and surf culture invites the public to come out to Santa Monica beach for lively entertainment. Pictured is Kathy Kohner Zuckerman, the original “Gidget” immortalized in movies and books, who will be one of the celebrity surfers attending the event called Project Save Our Surf: SURF 24.

The 4th annual event is held on the very beaches where Zuckerman learned how to surf and shared her insider knowledge of the surf culture, its lingo, and lifestyle with her father who was a professional writer. The material was turned into Gidget movies with the likes of Sandra Dee and Frankie Avalon, a TV series with Sally Fields, and a series of fictional novels based on the real-life “Gidget”, a nickname Zuckerman was assigned by the surfers who shared their surfboards and culture, allowing her to become an insider and member of their surfing world.

Many celebrities and top surfing competitors will be on hand at the event:

There will be 12 teams of 24 participants per team. Each person on a team surfs for 45 minutes. Team members are encouraged to raise $500 per person with 100% of total donations going to charity. Skill level is not a priority. Prizes will be awarded to the individuals and teams who raise the most money. The event also features daytime activities for the whole family including live music, mural painting, guest speakers, yoga and eco-friendly exhibits.