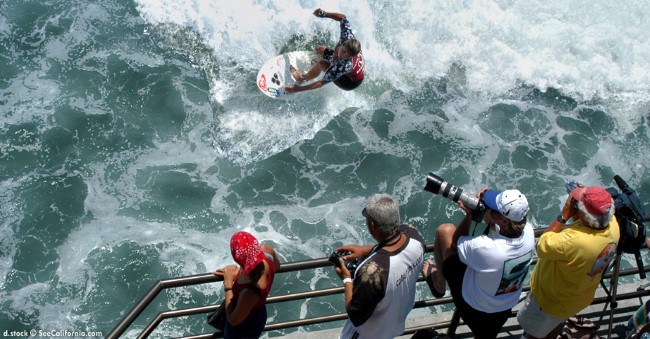 Surfing conditions are really nice today in California (Friday, October 14, 2011) with a pick up in surf for most areas. Exposed breaks are coming in at waist to chest high and a northwest swell is fading, being replaced by a newcomer, a SSW Southern Hemisphere swell that is building slowly in the southern areas.

The surfing conditions don’t mean a lot to tourists who simply want to take pictures of surfers at the favorite surfing beaches. A nice telephoto lens really pulls the action in, but most can get great souvenir pictures with a cell phone. They generally won’t be awarded prize-winning shots, but they’re good enough for memories.

If you happen to be passing by Oceanside in San Diego County, the California Surf Festival October 13-16, 2011 celebrates awareness and support for surf history preservation through the California Surf Museum. The public is invited to Sunshine Brooks Theatre, Oceanside, CA, to watch surf movies: $10. Saturday’s VIP Reception for The Still Point at CSM: $35; All Access Pass $90 Entry to all movies, receptions, VIP Reception. californiasurffestival.com

If you want to learn to surf, there are surf schools all along the coast offering lessons for a fee, usually included with board and wetsuit rental.

Go enjoy the sunshine and the cooling trend in a week that broke records with 105 temperatures in some near-coast cities in California! It was over 100 degrees at Disneyland this week! Hot!