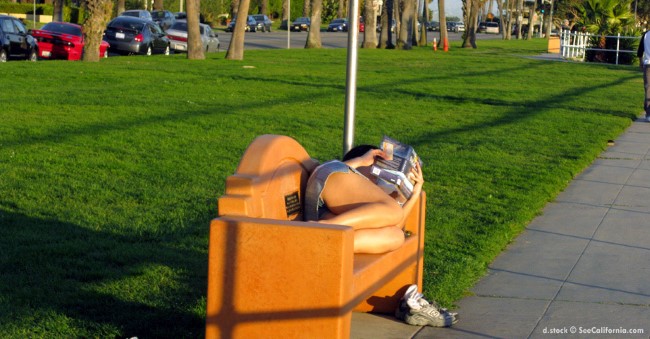 What a shock! A woman enjoys a California public park bench, and reads a book checked out from a library.

I am surrounded by writers — who actually continue to publish books! Remember those printed items filled with stories, pictures and information? Schools still use them, and amazingly, there are still libraries that continue to provide them to the public, though the days of the library and books are dwindling. When friends, family and strangers tell me they are publishing a new book, I ask them why. Aren’t books obsolete?

Such was the tale of the Obsolete Man played by Burgess Meredith on Twilight Zone episode 29 in the 2nd season. Scenario: In a future state where religion and books have been banned, a librarian is judged obsolete and sentenced to death.

Librarian Romney Wordsworth is called to a State tribunal where the Chancellor declares Wordsworth is “obsolete”. Since there are no longer any books, there is no need for a librarian. He also denounces the existence of God, noting the State has disproved His existence. Wordsworth insists that he has value as a human being, but the unanimous verdict by a panel decides that he is obsolete, and thus guilty. The Chancellor announces that Wordsworth is to be executed within 48 hours but he has the option as to the manner of his death and the exact time.

As my local libraries teeter on the brink of closure to become entertainment centers with high tech displays to entertain the masses, the concept of a depository for books where people can go to check out information for free, is becoming passe. The futuristic Twilight Zone episode whose premise was hard to fathom when first broadcast in 1961, some 50 years ago, proves Rod Serling’s creative imagination as a writer was on the mark.

More people have gained access to the world’s books through the likes of Kindle where you pay to play and libraries have taken their resources online, as libraries scramble to avoid becoming obsolete while their public space shifts to profitable ventures such as rental venues for concerts, plays, meetings and entertainment.

Is the librarian obsolete and has man disproved the existence of God? It doesn’t take an episode of Twilight Zone to discover the chilling answers. The U.S. government, while in a state of near financial collapse, is seeking to control and police the Internet through Big Brother censorship, thanks to some heavy lobbying from intellectual property special interests. Such authority would give individuals and committees the right to pull the plug on offensive comments, books, libraries, websites and whatever was deemed obsolete or inappropriate.

Preventing Real Online Threats to Economic Creativity and Theft of Intellectual Property Act of 2011 (PROTECT IP) was introduced by Senator Patrick Leahy (D. VT) and nine other senators on May 12, 2011. It is a smoke screen to introduce new censorship provisions that violate First Amendment freedoms, without which all others are at risk in U.S. Reported to committee on May 26, it was placed on the Senate calendar for a floor vote yet to occur.

When books are accessed solely online, the censorship controls can eventually banish books and thoughts expressed on websites by simply pulling the plug and “killing” them. Rod Serling may be right on the mark. Now that’s scary!