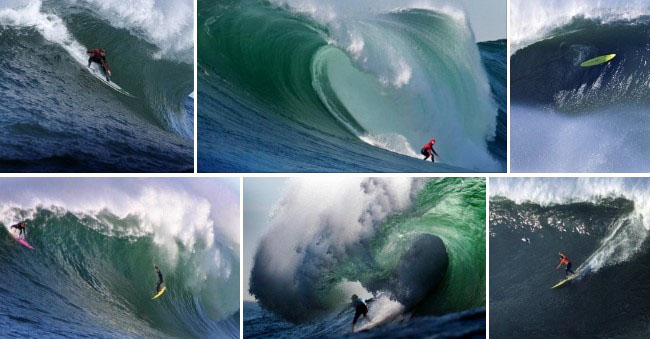 HALF MOON BAY, CALIF. –While California beach cities such as Huntington Beach & Santa Cruz tussle over who’s the real Surf City, the biggest event in surfing lore takes place in San Mateo County north of Santa Cruz. And with big waves on the horizon, it is likely to take place soon. The most exciting (and dangerous) event to hit the shores of the West Coast U.S. has announced its open season that runs through March. During this time or window, the world’s strongest big wave surfers are on alert that a game could be called, requiring that wherever they may be, they must stop what they’re doing, hop on a plane and get to the coast 30 miles southwest of San Francisco if they want to participate in Mavericks Big Wave Surfing Championship.

With a specific set of conditions unique to the West Coast, Mavericks is a legend in Big Wave surfing. Laird Hamilton, Greg Noll and Jeff Clark, featured in the movie, Riding Giants, are big wave surfers who’ve participated in the contest held each year. Waves can sometimes measure 60 feet and are so massive, one of the top surfers in the world came to Mavericks and lost his life trying to surf them recently.

During the Mavericks Big Wave Surf Contest there is a 72 hour period in which the contestants (all selected and invited) are notified that the event will occur. Around 40,000 Bay Area locals have shown up in the past to watch what they can see of the event, though the action takes place off shore and sometimes beyond view.

Several years ago the audience got an unexpected taste of the “Big Waves” when a rogue wave made its way to shore. 16 people watching the event from Mavericks Beach were sent to emergency treatment with one man experiencing a fracture. Even the announcers on their platform talked about their escape route, but in true surfing form, the show continued, and the final victor was Chris Bertish of South Africa that year.

Due to the dangers involved and possibly the fact that the event nearly disbanded because of liability, the surfing contest this year will be based in the water, with competitor support and judging to take place on the water. There will be no scaffolding on the beach, and public access to the beach and bluffs will be restricted by the San Mateo County Sheriff, California Parks and other coordinating agencies.