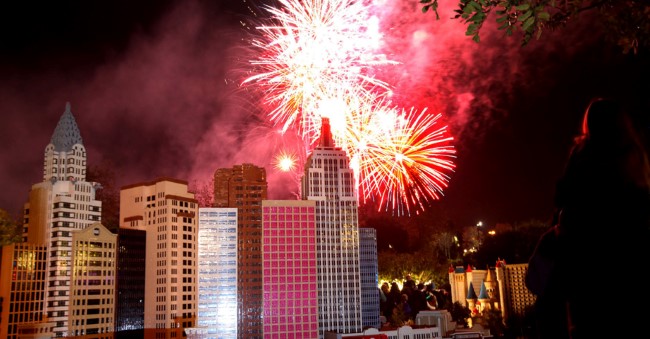 Though New Year’s Eve is traditionally celebrated at the tick of the clock hand past the Midnight mark, at Legoland in Carlsbad, kids have their own tradition (see New Year’s Eve 2010-2011) that celebrates New Year’s with fireworks in California’s earliest New Year’s Eve Celebration at 6 p.m., just after dark.

The New Year’s Eve festivities kick-off with a party that lets children celebrate the ringing in of 2012 without missing their bedtime, yet enjoying the famous apple drop in miniature Times Square –it’s a countdown of a huge Lego brick that drops 22-feet into 2012, ending with a spectacular fireworks display.

Grammy nominee Justin Roberts, rising Star, Lyndsey Cannon, and Hip Hop artist, Secret Agent 23 Skidoo, are joined by other featured bands Aaron Nigel Smith and the Fundamentals, Lucky Diaz and the Family Jam Band, and and the Not Ready for Naptime Players for a lively concert that will have the whole family dancing as they ring in the New Year.

December 31, 2011 from 2 to 6 p.m. Kids will be decked out in glow bracelets, fireworks viewing glasses and party hats. Before you go, see: Legoland.com