Paintball Hurls, And That’s The Way the Players Like It At California Tournament! 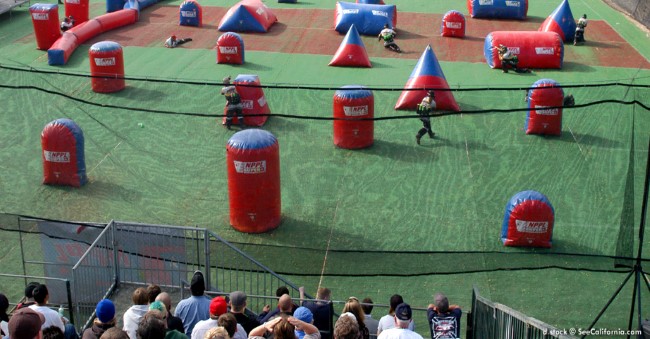 If you’d rather see colorful balls of paint (the size of gumballs) hurling through space and hear the sound of a splat as they hit someone’s back– rather than listen to the roar of engines on the racetrack–then the sport of paintball is definitely more your speed!

It’s been around for well over a decade and the passion among the player/participants doesn’t seem to diminish in a sport that nicely put — ain’t cheap to play. Paintball requires expensive guns, then there’s the paint, the gear, and if you really are into it, the competitions come at a price. They require travel and team fees. Of course you have to bring your family–your parents, grandparents, cousins, sisters, brothers and all the team members. They come to the better cities on the National Paintball League Tour held throughout the U.S. In California, they like to visit and Huntington Beach and make it a vacation.

Paintball has had its ups & downs. Last year the California legislature sought to regulate and essentially outlaw the types of guns used in paintball. Can you imagine a bunch of teens, 20s and 30 somethings having to go underground to find guns and play illegally in parks and fields? They’ll do it and it won’t be pretty. While the sport attracts about 80% guys, girls play paintball, too, and some are pretty good at it!

The industry doesn’t compare with surfing, skiing, skateboarding and other popular sports enjoyed in California, but the fan base is dedicated and will travel miles to play at privately operated paintball parks – some 20 or so in California at our best count.