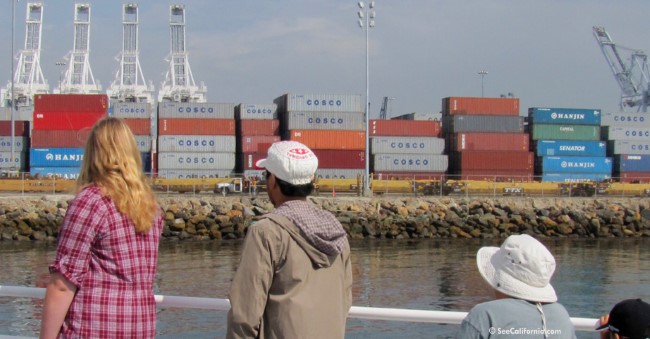 (Compiled by seecalifornia.com staff from reports, officials at the event, interviews and a special harbor tour of the area)

The Port of Long Beach, the second largest port in the US, recently put on a spectacular show-GreenPortFest-for thousands of people which not only showed how they're helping clean up the environment but impact the economy. Numerous exhibits, train and boat tours, vendors, giveaways and even a chance to paint with internationally-known Marine Life Artist Wyland, made the day memorable for all lucky enough to attend. 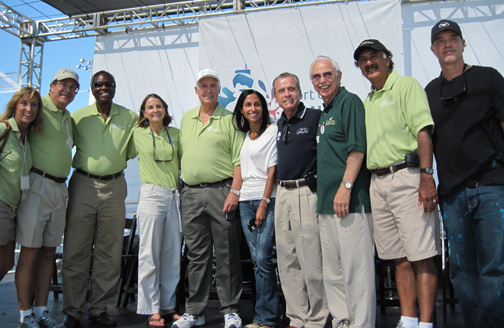 FASCINATING PORT FACTS: More than $140 billion worth of cargo passes across the port's docks each year, bound for storeshelves and factories across the United States, and exports leave bound for foreign docks.

Over 5,000 vessels come to the port each year, including many ships that carry from 5,000 to 8,000 containers per vessel; one of the crane operators may unload about 25 containers per hour and a ship might be here for 1-4 days; Half the containers go on trains; the others on trucks; Some of the cranes are as tall as a 30-story building; A ship might be over three football fields long; One of the largest cargo container ships could carry enough shoes to supply one pair each to nearly every person in California (31 million); There are 6 million cargo containers units, containing everything from clothing and toys to food and medical supplies, handled at the port each year.

The ships bring in more than 6 1/2 million tons a year of "Dry Bulk," cement, gypsum, salt, coal and petroleum coke; Over 1.3 million tons of "Break Bulk," goods that can't be stored in containers, such as steel, lumber and cars. (There are two auto shipping terminals that handle Toyotas and Mercedes-Benz' coming into the US.); 32 million tons of "Liquid Bulk," chemicals and crude oil, transported by underground pipes from the port to local refineries.

It's also home to "Sea Launch," ships and equipment that launch satellites into space from the Equator for customers like DirectTV, making Long Beach the only seaport in the world that exports products to Outer Space. 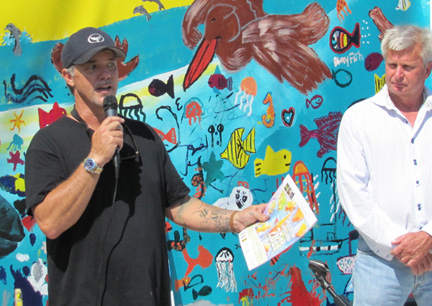 GreenPort Fest 2010 included a special guest appearance by famed artist Wyland, who has painted over 80 public whale & ocean-themed murals, including the Long Beach Arena mural which is the largest such mural project in the world. Wyland's team brought a portable classroom with hands-on displays about ocean ecology and a mural providing painting opportunities for all ages. He also presented awards to youth for their written works about the ocean.

Some of the port's biggest customers are COSCO (China), K-Line (Japan), Matson (US), Hanjin (South Korea) and Mediterranean (Switzerland).

IMPORTANT PORT ENVIRONMENTAL NEWS: The port says the average number of birds at the harbor has more than doubled since the 1970s and biological surveys have shown improvement in the diversity of fish species because of the port's improvement efforts; Green Port Policy programs have vessels coming to Long Beach slow down to 12mph when they are 40 miles from shore to reduce emissions; To reduce pollution, more ships are plugging in to Southern California Edison electricity at the port rather than running their own diesel; More containers are being placed on dock rail and by 2012 the goal is to have only the latest model trucks (which bring and take away many of the containers) being used thus reducing air emissions by an estimated 80%.

PORT JOB NEWS: The port supports 30,000 jobs in Long Beach and 316,000 in Southern California. About 1.4 million jobs throughout the US are related to the Long Beach-generated trade.

PORT SECURITY: A multiple federal, state and local security effort is ever present, which includes the US Coast Guard, US Customs, Homeland Security, Long Beach Police, Long Beach Harbor Patrol and many other groups.

GET MORE INFO: Check out their website, polb.com to find out more.