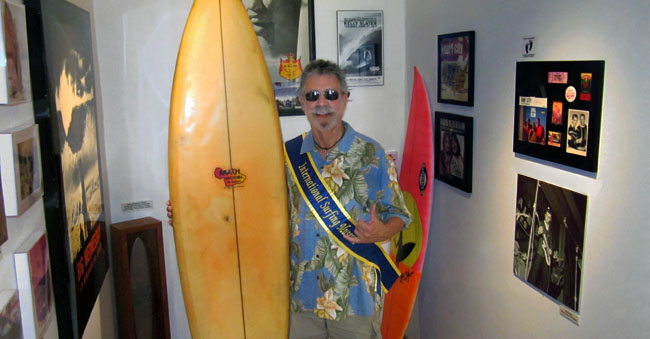 There's nothing not to like about Bob "The Greek" Bolen, who's campaigning for the prestigious 2014 "Mr. Surf City" title. The modest surf legend is doing it to raise funds for Huntington Beach's International Surfing Museum and the HB Police Officer's Association (for their 9-11 Monument to be built at City Hall). Don't let "Smiling Bob's" wit and easy-going manner fool you. He's really a listener, who cares about his community, and has been helping people for decades. But "The Greek," who got the surfing moniker because his grandparents came from Kalamata, Greece, is actually a very creative, focused fellow. He began shaping surfboards in 1958, and opened HB's second surf shop, "Surfboards by the Greek" in 1960, where Jack's Surfboards stands today. (Ironically. He later created Huntington Surf and Sport at 15th and PCH, which he sold and is now across from Jack's.) No wonder his "Local Hero Star" is on the Surfer's Walk of Fame (north sidewalk off Main, near PCH).

"The Greek's" surfing and creativity led him to invent and patent the World-famous "Turbo Tunnel Fin," which is used by some of the greatest surfers to add a little whip on turns and stabilize the board in the water. One of his Maui Model boards from 1960, featured in the International Surfing Museum's "Hundred Years of Stoke" exhibit at 5th and Olive, is still made by "The Greek" today. Bob "peddles" surfboards online and in his museum/business, Huntington Beach Realty, 322 Main. St., where he also has a cool line of sweatshirts, T-shirts, hats, side fins and stickers. The hard-working surf mogul is also an acclaimed Broker, whose two sons, Michael and Matt, are Realtors with him and daughter Kim, handles the firm's Property Management. His wife, Patty, has helped the dynamic family become successful. He also co-founded the International Surfboard Builder Hall of Fame, which has an annual ceremony every December at Doheny State Beach in Dana Point. "The Greek" grew up surfing at Dana Point and Huntington Beach.

The 2014 "Mr. Surf City" candidate recently raised more than $6,000 for his two charities and he continues to illuminate his caring for the community with everyone he meets. You can find out more about this truly nice guy by going to surfboardsbythegreek.com, huntingtonbeachrealty.com or, better yet, drop into his museum/office on Main Street and say, "Hi." You'll see why he and his friends helped turn Huntington Beach into "Surf City."