Ruby’s Diner celebrated its 29th birthday yesterday and rolled back the prices on most of its restaurants, offering a Hamburger & French Fries for $2.99! We got in on the deal last year visiting the Ruby’s on the Seal Beach Pier, and this year went right to the place where it all began in the small diner on Balboa Pier in Newport Beach. Since opening on December 7, 1982 with three employees and a simple, straight-forward diner menu of hamburgers, hot dogs and malts, the founder’s (Doug Cavanaugh) mother, Ruby, is proud of her son’s accomplishments. 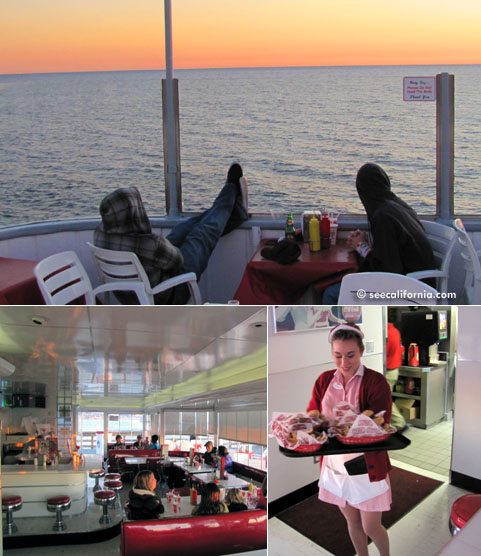 Ruby’s is now located in airports from Las Vegas to Houston, in cities throughout the nation, and has a strong presence in California where it all began. In California, you’ll usually find Ruby’s Diner where there’s a public pleasure pier. For kids who eat there, they get a classic car made of cardboard that they can make while dining and doodling. Ruby’s is casual, fun, and is known for its red vinyl booths and bar stools reminiscent of a 50s diner.

As we watched the sunset on another successful year, dining on delicious hamburgers and fries (and sipping malts that cost more than the meal, itself, we knew that we’d return to Ruby’s to eat again. The food is fantastic though priced slightly higher for its sometimes prime ocean views and California beaches locations serving tourist destinations. Even in the non-beach locations, the atmosphere is colorful and fun as you watch waitresses deliver meals in red & white candy-striped outfits. My favorite burger contains bacon and BBQ sauce. It’s delicious! – rubys.com