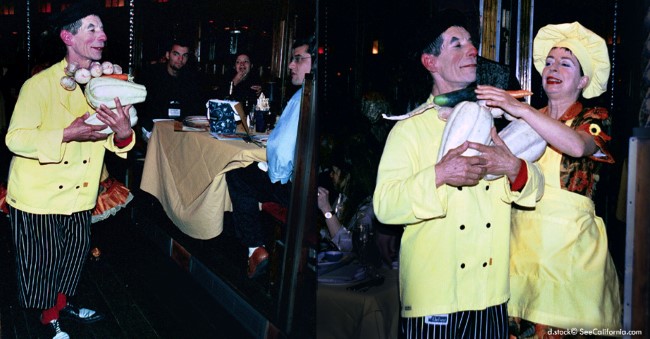 The delightful dinner cabaret filled with unique actors, acrobats and known recording artists, provides my favorite food experience for pure entertainment in San Francisco. It is one of many entertaining dinner shows in California. And now it is closing on Pier 29 to make way for America’s Cup. Boo-hoo!

Have you ever watched a baby sitting in a high chair continuously throwing down a bottle, piece of food, or toy from the tray in front of that toddler? What can really get to you as an observer sitting at a nearby dinner table is watching people pass by or with the child, keep picking up the object and placing it back in the tray, only to have the baby instantly throw it down again. Time after time after time. What kind of insanity is that? It offers a glimpse into the hilarity you might see at a Teatro Zinzanni show.

Shown in the photo are cast members from Teatro Zinzanni who are “kitchen staff”. He comes out of the kitchen with armfuls of fruits and vegetables, but keeps dropping them. Others (including bystanders who are there to watch the show) keep picking up the fruit and placing it in his arms, only to have this exaggerated character bumble along and drop objects once again. It’s irritatingly funny. But it’s just the start of a show filled with world-class music, illusion, costumes, lighting and incredible talent. We hope it never goes away!

After more than 11 years, 800,000 visitors, 40 different theatrical productions and 200 of the finest international performing artists, Teatro ZinZanni’s final performance in the Pier 29 Spiegeltent on New Year's Eve 2011 brings the curtain down on this delightful San Francisco tradtion. They are working closely with the City to locate a new permanent home. Good luck–and don’t leave! zinzanni.org