Sean Collins, a Legend Who Changed an Industry with His Uncanny Abilities to Predict Waves 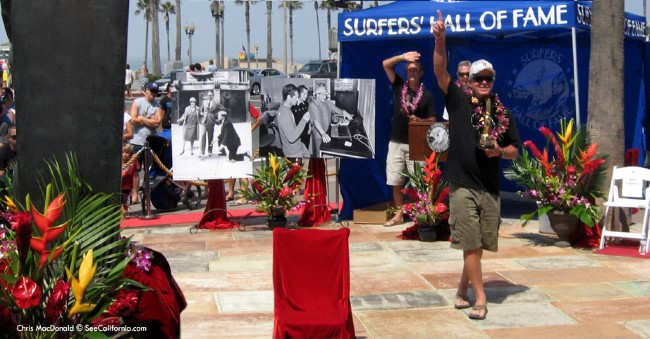 Pictured is Sean Collins, immortalized on the Surfers Hall of Fame in Huntington Beach, Calif. in 2008. Collins died unexpectedly of a heart attack while playing tennis the day after Christmas, December 26, 2011, in Newport Beach. He is survived by Darren, his wife, and two sons, Tyler and AJ, of Seal Beach, Calif. He also leaves behind a successful and unique Huntington Beach-based business in Pierside Pavilion overlooking the Huntington Beach Pier.

Surfers and sailors know the name, “Sean Collins”. Whenever the waves mean something to you, be it an important boating race, trip, or surfing event, Collins could predict the waves with incredible accuracy that turned his name and business, Surfline, into world-famous commodities. Over the past 30 years, a proprietary system of wave forecasting created by Collins has been used by countless agencies and over 1.5 million surfers, sailors, travelers and scientists worldwide each month.

Sean Collins was born in Southern California on April 8, 1952, and died at the age of 59, shocking his family and friends who knew him as an active sportman with a youthful attitude. He surfed in Seal Beach as a kid and competed in surfing championships throughout his school years.

The Wilson High (Long Beach) grad also loved to sail, thanks to a passion he developed aboard the 50-foot sailboat owned by his father, Whitney, a general contractor and navy lieutenant during World War II. Venturing around Long Beach as well as entering races to Mexico and Hawaii, Collins first became interested in meteorology as it related to sailing and surfing.