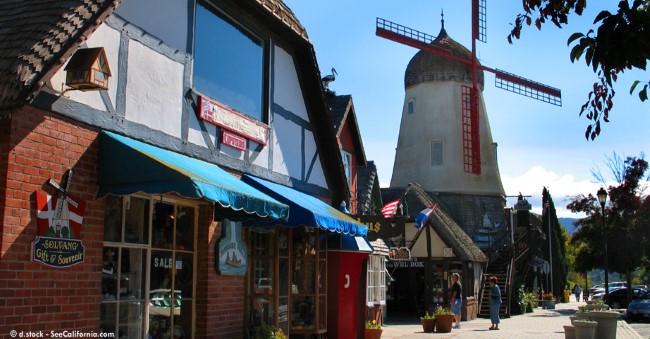 Windmills are something old in the world landscape–and something new, as California especially looks to energy efficient methods of capturing the wind for power. In the California you’ll see huge windmill turbines in long rows in three regions of the state–Altamont Pass east of San Francisco, Tehachapi southeast of Bakersfield, and San Gorgonio near Palm Springs. There are around 13,000 in existence, according to California Energy Commission (energy.ca.gov). These areas once produced 30% of the entire world’s wind-generated electricity.

In Solvang, California, located approx. 132 miles north of Los Angeles, windmills have been a way of life for as long as anyone can remember. You’ll see them on buildings throughout the city. Though the windmills throughout Solvang are primarily decorative, they are inspired by Danish windmills that are more functional. According to some sources, Denmark produces more than one-fifth of all its electricity with about 5000 windmills.

While Solvang’s windmills are fun to look at for their decorative ornamentation, they remind us of the potential to harness the wind and nature’s gifts.