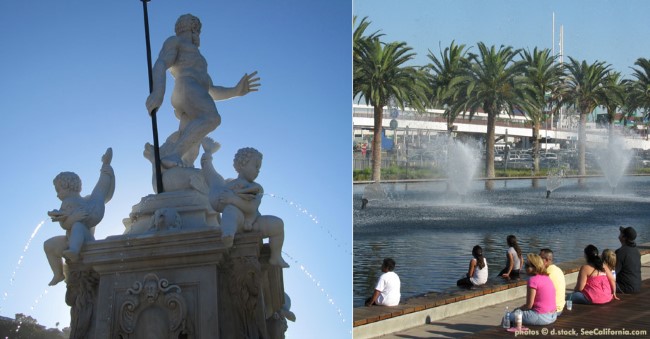 Different as day and night are two water fountains in Los Angeles cities Rancho Palos Verdes and San Pedro. The fountains are public attractions that you can see approx. 15-20 minutes distance from each other by car. The Malaga Cove Plaza in one of the earliest masterplanned communities in the United States, contains Neptune Fountain (left photo) built in 1923, as a two-thirds size replica of a fountain The Fountain of Neptune (Fontana di Nettuno) in Bologna, Italy dating back to 1567.

In the Port of Los Angeles in San Pedro, Fanfare fountain and water show timed to music shoots 400,000 gallons of recycling water up to 100 feet in the air, with 40 programmable MiniShooter jets and 18 Oarsmen assemblies. Fanfare Fountains & Water Features comprise the largest water feature in California, with musical shows every 10 minutes to half hour. Designed by WET Design of Sun Valley, Calif., the designers are known for the The Fountains of Bellagio, Universal CityWalk and Tokyo Dome. EDAW of San Francisco was the design and landscape team for the Gateway Plaza. Fanfare opened in 2008, and is free to see.