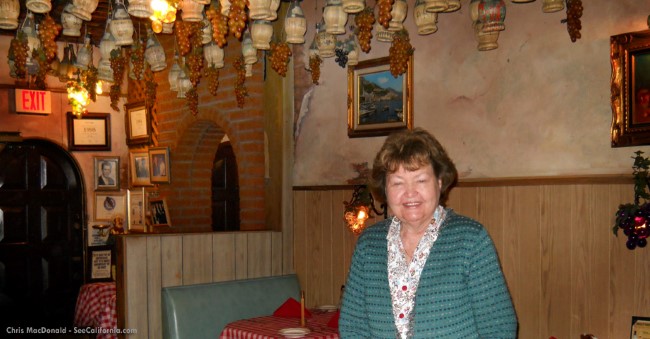 There's something about eating Italian food and speaking Italian that Californians embrace-especially on Valentine's Day. A survey of restaurants in California shows that the type of restaurant that sells out most on February 14 is Italian.

"It's a tradition," says co-owner Inge Cristiano, of Nino's, who has watched couples laugh, kiss and even say "Lo sposereste?" (Will you marry me? ) during the 53 years the restaurant has been in Long Beach. Well known Italians such as Frank Sinatra have eaten at this cozy place that feels like home. Dean Martin, Chevy Chase, Muhammad Ali and Ann Archer are among the clientele whose pictures hang on the walls.

Nino's Italian Restaurant opened in July 1958 in Long Beach's Bixby Knolls neighborhood fulfilling a dream of Vincenzo and Inge Cristiano. Vincenzo, who is from Grumo Nevano, a small province of Naples, Italy, traveled to 38 countries as a chef, searching for the perfect spot to hang his hat in his own business. He met Inge, who is from Frankfurt, Germany, and together they moved to Long Beach and started a life-long venture called Nino's, named after their oldest son.

"In the 50's people were calling restaurants names such as Bob's or Bill's," says Inge, who said they chose their son's name over the owner's name, Vincenzo, which they were sure nobody would remember.

They also have two other kids who grew up in the restaurant and work there on occasion. Their son Mike, a Realtor with Main Street Realtors, and their daughter Carina, who works for The Atlantic Corridor, both come into the restaurant when help is needed. Mike says he came to the restaurant after school each day when he was young, helped out and learned to cook early on.

With several themed rooms and a cocktail bar, you'll like the nostalgic atmosphere with wine bottles and grapes hanging from the main ceiling, and the cozy fireplace and beautiful Italian decor in another room. The food is well priced and comes in large portions.

I recommend the Chicken Noodle Soup and The Spaghetti. 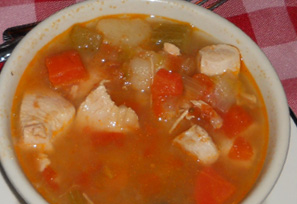 Their bread is also homemade and is delectable. They also have Pizzas, Paninis (with amazing, perfect crust!) and many more items on their large menu. On the First Friday of each month Nino's has Artists that display their work in the Restaurant and Live Music. Log on to: ninoslongbeach.com to get more information. You can also call: (562) 427-1003. You can become a fan of theirs on Facebook and Twitter as well. Be sure to book early for Valentine's Day and other holidays. The restaurant is popular and you can't count on showing up and having a seat.

I love you - Ti Amo
I am falling in love with you - Sto cadendo nell'amore con voi
I can't live without you - Non posso vivere senza voi
Your eyes are like two stars in the night - I tuoi occhi sono come due stelle nella notte
My heart is for you - Il mio cuore č per voi
To my darling - Al mio amore
I love you with all of my heart — Ti amo con tutta l'anima
My love - amore mio
Would you like to dance with me? - Balliamo?
Are you alone? - Stai da solo
You are the most beautiful woman I've ever seen - You siete la donna che piů bella ho visto mai
I've been dreaming about you - Stavo sognando di voi
Will you marry me? - Lo sposereste?