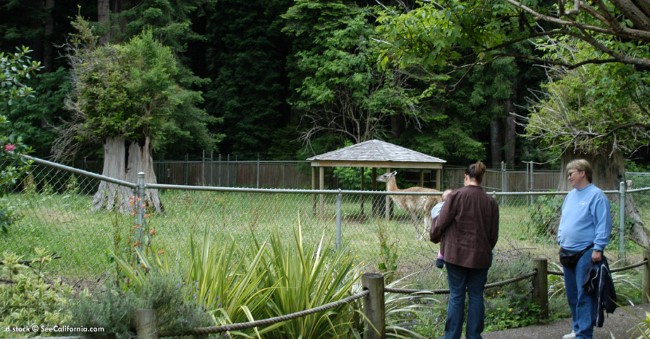 Eureka, California--As California's oldest zoo set among the world's tallest trees, Sequoia Park Zoo was founded in 1907 (and the trees established foundations thousands of years earlier) in the City of Eureka. The creation of the zoo was simple...a fence was erected to contain animals inside the newly created city park. An orphaned black bear from an Alaska hunting expedition, a wallaroo purchased on the docks in Sydney, Australia and shipped back to Eureka by a sea captain, baboons, African lions, camels, chimpanzees, tigers, polar bears, bison, exotic birds, and small mammals, all found the city's friendly animal hotel one of the best places to stick around. The lodgings were free, the setting serene, and the food supplied on a regular basis with well-rounded meals delivered right to the door.

Good times, bad times--The 70's were the bad times when funding went dry. Good times followed in the 1980's and onward to today.  In 1995 Sequoia Park Zoo was accredited by Association of Zoos and Aquariums (AZA). Two male chimpanzees abandoned by the entertainment industry: Bill and Ziggy. They didn't get along, however, and were kept in separate areas. Touching the lives of generations of Eurekans, the affable Bill passed away in 2007 and the community mourned the loss of a best friend.

One of the most interesting portions of the zoo that draws families to interact with the animals was created in 2003 as the Barnyard, with an Entry Pavilion. Barnyard animals are contained in pens where families and children can grab a brush to comb their fur. Or follow the life a beehive contained in a see-through plexiglass wall. An interpretive center offers lessons in native redwood ecosystems. It is called Secrets of the Forest.

While residents tend to take for granted the towering forests that surround this beautiful zoo, tourists comment that it's difficult to decide what's most memorable about the Sequoia Park Zoo--the animals or the trees. Next to the zoo is a public park with deep, shaded drives in groves of these tall, tall redwood trees. It is almost like being on another planet for those visiting from Southern California, a desert that is mostly flat, and not quite so shady.

The Sequoia Park Zoo is one of the most important cultural facilities in the area. The Zoo is committed to providing a high quality facility that offers not only the care of a variety of animals, but also an opportunity for visitors to experience a greater appreciation of the value and diversity of our planet's life forms. Surveys show that more than half million people in ten counties located in the Shasta Cascade and North Coast Regions of California visit and utilize resources of the only municipal zoological gardens on the Pacific Coast between San Francisco and Portland. As such, it serves a wide and diverse population. Conservation, education and recreation make Sequoia Park Zoo proud--it is one of the smallest institutions that has been accredited by the Association of American Zoos and Aquariums, but because of its majestic redwood surroundings, it is one of California's favorite zoos!