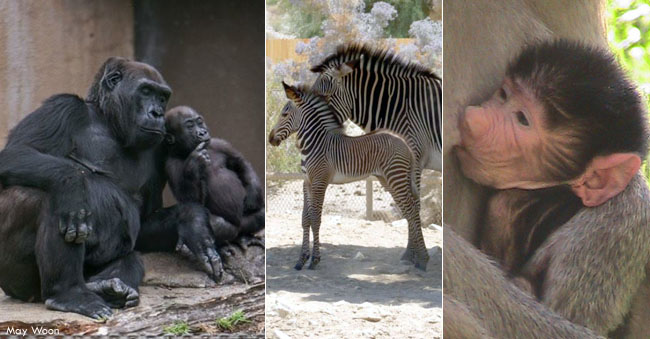 ESCONDIDO/SAN DIEGO: Safari Park's youngest gorilla born by caesarian section in March, is thriving and growing. The newborn had a rocky start-- undergoing emergency surgery for a collapsed lung and then treatment for pneumonia after her mom, Imani, seemed to initially lack maternal instincts and care for the newborn. But Imani and Joanne have bonded well and Joanne is eating healthy greens, lettuce and kale.  sdzsafaripark.org

EUREKA: Sequoia Park Zoo pandas, part of a collective breeding plan,   produced two cubs in July of 2014. Native to the mountain forests of Western Asia, they are nearly extinct in the western part of their range because their forest home is being removed for development. sequoiaparkzoo.net

FRESNO: Fresno Chaffee Zoo Baby News --  Endangered Red Wolf Pups were born in May.  The Zoo discovered the female red wolf had given birth to a healthy litter of three pups, two male and one female, in her den. fresnochaffeezoo.org

LOS ANGELES: L.A. ZOO'S LAIR CELEBRATES AN ABUNDANCE OF SNAKE BABIES State-of-the-art Facility Allows Species to Breed by Mimicking Southwest Desert.   The Los Angeles Zoo has recently welcomed an overwhelming number of snake babies all born on exhibit in the Desert LAIR building over the last month. While it is currently breeding season for these snakes in the wild, they are able to successfully breed here at the Zoo because of their habitat, a state-of-the-art facility that mimics the natural environment and seasonal changes of the Southwest desert. Among the snake species recently born, is a litter of five rattle-less rattlesnakes of the venomous pitviper species, currently critically endangered. It can only be found on one tiny island called Isla Santa Catalina in the Gulf of California, just off the east coast of the state of Baja California Sur, Mexico. This small and swift rattlesnake is known for its most distinctive characteristic – it lacks a rattle! lazoo.org

OAKLAND: A baby  hamadryas baboon named  Mimi, the third baby baboon born at Oakland Zoo during the last year and a half, is nearly three months old now! She has been well received by her siblings and parents,  troop leader, Martijn (13) and Maya (9). The group was relocated to Oakland in 2013 from the Emmen Zoo in the Netherlands. oaklandzoo.org

PALM DESERT: The Living Desert's endangered  Grevy zebra foal  born in May will soon be getting a name.  The Living Desert is an active participant in the Grevy Zebra Species Survival Plan. livingdesert.org

REDDING: Turtle Bay recently received a seven-week-old male beaver from the Minnesota Zoo located in Apple Valley, Minnesota. Three kits were born and each of them needed a new home. The male selected for Turtle Bay was chosen because of his calm demeanor. He is currently the size of a football, plus a tail, and will be raised by Turtle Bay's Animal Care Staff until his habitat within the Museum's Aquarium is built and completed. turtlebay.org

SAN DIEGO: ALALA BREEDING SEASON A SUCCESS: Partially feathered and squawking for meals, `alalā chicks at San Diego Zoo Global's Keauhou Bird Conservation Center keep animal care staff busy. With nine new chicks this year, the rare bird's population now numbers 114. `Alalā (also known as Hawaiian crows) are extinct in the wild, and the entire remaining population is managed in captivity through a collaborative effort by the Hawai`i Endangered Bird Conservation Program (HEBCP). Some of the chicks are fed and cared for by animal care staff, which the chicks never see to ensure they do not imprint on humans. sandiegozoo.org

SAN FRANCISCO: Four adorable Magellanic penguin chicks (3 males and 1 female) waddled through the Zoo to their new home on Penguin Island last month. With much pomp and circumstance, this event celebrates the chicks' graduation from Fish School, where they lose their fluffy down, learn to eat whole fish, swim, and accept food from their human keepers.  sfzoo.org

SANTA ANA: Santa Ana Zoo in Prentice Park welcomed the birth of twin golden-headed lion tamarins several months ago. With only 75 of these rare tamarins living in North America, the tiny tots  weighing in at 1/8th of a pound  were considered a boon to the captive breeding program. Golden-headed lion tamarins are unmistakable jet black monkeys accentuated with sunshine orange hair on their hands and faces. santaanazoo.org

SANTA BARBARA: Santa Barbara Zoo -- A male giant anteater born at the zoo in the spring is the first offspring for the Zoo's adult pair, Anara and Ridley. Anara, aged two, gave birth to twins, but the female newborn pup did not survive. Twins in anteaters are rare, though Anara is a twin and was also hand-raised, at the Fresno Zoo.  zbzoo.org