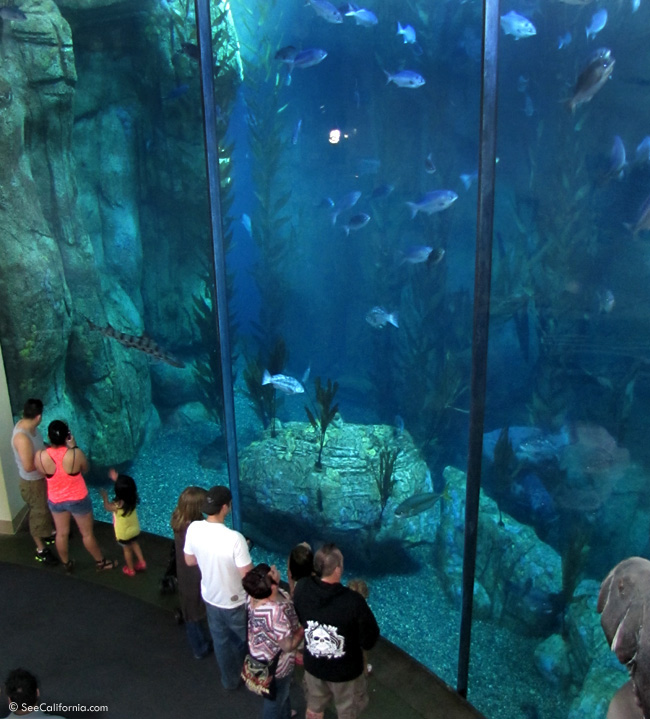 Aquarium of the Pacific

A driving circle and huge parking garage are a delight to look at. If you don't have time to go inside, at least drive by and examine the exterior structural design. A traffic circle greets your arrival.

The Aquarium of the Pacific in Long Beach is one of the largest Aquariums & Zoos in the United States with more than 12,000 ocean animals and nearly 50 exhibits requiring more than a million gallons of Pacific seawater. It is the only aquarium in the world to focus on the Pacific Ocean. The 4th most visited aquarium in the United States has water exhibits ranging in size and capacity from about 5,000 to 350,000 gallons.

Visitors can enjoy more than 500 species, in 19 major habitats and 30 exhibits which take them on a journey throughout the Pacific Ocean's three regions:
Southern California/Baja
the Tropical Pacific
Northern Pacific.

Additions to the Aquarium since its opening have included wetlands exhibit, Jellies: Phantoms of the Deep, Lorikeet Forest, a 5,200 sq. ft. walkthrough aviary where visitors interact with colorful and friendly birds from down under, Shark Lagoon, featuring more than 150 sharks you can touch…and some you can't,  Sea Otters and June Keyes Penguin Habitat.

In May 2018 the Aquarium of the Pacific unveiled its spectacular $53 million Pacific Visions wing. The awesome, eye-catching, unique, two-story, 29,000-square-foot, ocean blue structure is designed to show people how to create a glorious future by the decisions we make. The Honda Pacific Visions Theater takes the audience not only on land and sea but high above in the air and deep under the ocean engaging the senses through wind, scent, fog & seat vibration.

Daily presentations, special events that bring exceptional entertainment to the Aquarium, and Behind-the-Scenes Tours and Animal Encounter Programs are offered regularly, as well.

Each exhibit and its inhabitants receive processed seawater through a filter to keep the habitat environment clean. Depending on the tank exhibit and species that inhabits it, the entire tank filtering process takes place every 30 to 90 minutes. To ensure the exhibits are filled with the most pollution-free saltwater, approximately once a month, new seawater is replaced in each living exhibit tank. The water initially used in the Aquarium exhibits was supplied by Catalina Water Company. Water is currently being barged in from waters two to four miles outside of Long Beach.

"Please touch" areas for children, including participatory Discovery Labs and Rays Touchpool, and outreach vehicles augment the Aquariums serious commitment to Pacific discovery for everyone.

OPENING INVESTMENT: $117 million  The architecture is a joint venture of Hellmuth, Obata & Kassanbaum (HOK) and Esherick Homsey Dodge and Davis (EHDD) of San Francisco. EHDD designed the critically acclaimed Monterey Bay Aquarium and has collaborated on the plans for numerous marine exhibitions worldwide.   Billed as the largest waterfront development in California history, the Pike Project features the Aquarium of the Pacific as a centerpiece of the project. The Queen Mary is an Aquabus ride across the harbor.

Where to eat? There are many great restaurants surrounding the Aquarium with a few favorites that include PF Chang's, Bubba Gumps and Parker's Lighthouse.   Where to park? Parking in a garage next to the building offers many parking spaces, fee charged.