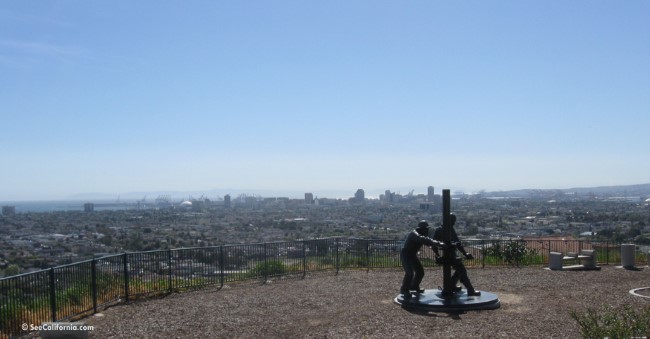 Signal Hill - Only City In US Surrounded by Another

Indian signal fires used to rise frequently from the top of a major hill, some 365 feet above what's now known on all sides below as "Long Beach." The Native American's communicated with smoke signals that could be seen as far away as Catalina Island (26 miles).

This popular hill also helped launch a lot of careers over the years:
--Pioneer Aviator Earl Daugherty's handcrafted gliders soared off it. (He would lobby Long Beach to build an airport below, which they did.)
--Movie Stars Buster Keaton, Fatty Arbuckle and others became famous Worldwide by their acting in pictures made on the hill between 1913-1923. --Oil was discovered on the hill in 1921 and soon there were more than 100 derricks in action, prompting some to call it, "Porcupine Hill."
--The City of Signal Hill got statewide attention when it was incorporated and chose a woman, Jessie Nelson, as its First Mayor, making her the First Woman Mayor in California.
--The World's First All Jazz Radio Station, KNOB-FM, was launched from a two-room "studio" near the transmitter atop the hill (1956-57).

Today, you can stroll within a one mile radius around the hill (off Skyline Drive) and not only get exercise and see an incredible 360-degree view but also see where real history was made. At Sunset View Park (2300 Skyline Drive) is a neat display celebrating "Broadcasting & Music" on the hill.

You can read about KNOB's history and see a photo of Al "Sleepy" Stein, who founded the World's First All Jazz Radio Station, which pioneered live radio performances from local jazz clubs. For 16 hours a day, thanks to Stein and his "cool kats," jazz could (eventually) be heard from San Diego to San Francisco. The KKJZ (Long Beach State) transmitter is located across the street, northeast of the park, next to where KNOB made history.

One night in April of 1958, a "jazz thief" broke into the studio and made off with every record--over 700pounds worth! "Sleepy" and his 11 fellow disc jockeys had to bring in their own records to fill the 16-hours of daily programming! Mr. Stein also launched the amazing career of the legendary jazz radio personality, Chuck Niles, who helped make KNOB famous from 1957-1965.

If you walk up the sidewalk, just West of the KNOB tribute, you'll "feast your eyes" on a sculpture honoring the Oil Industry's Roughnecks. Featured are lifesize figures of Jerrel Barto and Bruce Kerr, wonderfully sculpted by Cindy Jackson. The sculpture honors the hundreds of courageous men and women, who have been part of the Signal Hill oil fields--one of the richest in North America.

Barto and his son acquired Shell Oil's interests in the Signal Hill area in 1984. They later took over some oil interests of ARCO, Texaco and others that became the foundation of Signal Hill Petroleum. Kerr worked for Shell 52 years and became their head of property administration for the Western U.S. (More info on the industry is available at Discovery Well Park, Temple and Hill Streets, site of the first oil producing well.)

From the sculptures, stroll around the neighboring Hilltop Park and find on its North end, a marker telling about the major oil fires in the area. Then, follow the hilltop trail east to locate a tribute to Aviation Pioneer Earl Dougherty, appropriately overlooking Long Beach Airport below.

In 1923, because of Earl's lobbying and others, the City Council set aside 150 acres near Spring & Cherry that became the famous airport. Southeast of this site, at Temple and Skyline, you'll see one of the most fascinating sculptures around--The Signal Hill Unity Monument, made by Patrick Vogel and dedicated in 2006. It's dedicated to the victims of the Sept. 11, 2001 atrocity in New York City--to those who lost their lives and to those who lost loved ones. The monument is a striking symbol of "our nation's renewed strength and unity."

It's made of 5 metals (stainless steel, brass, copper, copper-nickel and nickel) blended to form a sculpture representing our nation's diversity. It appropriately faces the East Coast as a lasting tribute. The artwork was made possible by the contributions of many, including Signal Hill Petroleum and Comstock Homes.