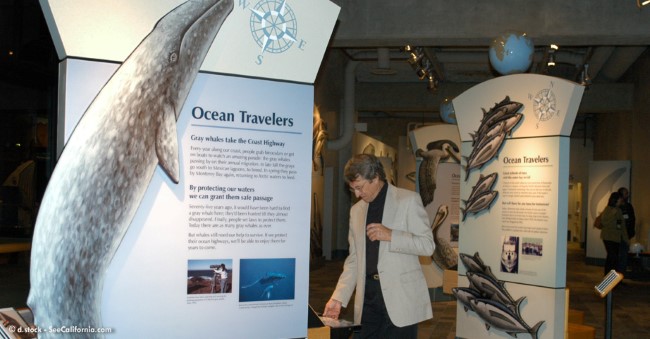 The Monterey Bay Aquarium, which has become internationally known for its incredible ocean conservation efforts, was born on October 20, 1984. That's when the official grand opening was held.


I was there, with my mother and 3-year-old son, the weekend it opened Oct. 20-21, 1984, and it has been creating major waves ever since. Spectacularly-built at the south end of Cannery Row, the amazing aquarium has played host to over 46 million visitors, 1.5 million school kids and distributed more than 32 million Seafood Watch Guides (which objectively show people the best ocean-friendly seafood). The Seafood Watch Program has even shifted the buying habits of the two biggest food service companies.

It's the only aquarium to successfully exhibit Great White Sharks, be home to the first living kelp forest and the largest living exhibit of deep sea creatures ever created, as well as the unbelievable jellyfish exhibits.

As a former Conference Director for one of the top companies in the World, I've never found a more incredible facility--full of awe and wonder to go along with delicious food--than this place. I have put on several major dinners in the Outer Bay Wing and Kelp Forest areas and not only are the venues awesome but the employees were an absolute delight to work with.

Credit must be given to David and Lucille Packard, whose foresight and funding helped create this fabulous facility as well as the Monterey Bay Research Institute. Under the loving stewardship of their daughter, Aquarium Executive Director Julie Packard, the caring team members, over 1,250 volunteers and the exciting creatures, the MBA continues to spread fascination and understanding of the oceans to young and old alike, gaining a new appreciation of the water that makes up more than 70% of the Earth's surface.

If you want to make ocean-friendly seafood choices and eat healthier, visit Seafood Watch on the Internet. If you join the aquarium as a member, you get all sorts of benefits from unlimited free admission, to discounts at the stores and for programs plus lots more.

It's no wonder the aquarium has inspired more than 24 others that have been created the past quarter century. A visit there will change your life!

Craig MacDonald is a Pulitzer Prize nominee, an Historian and Journalist.