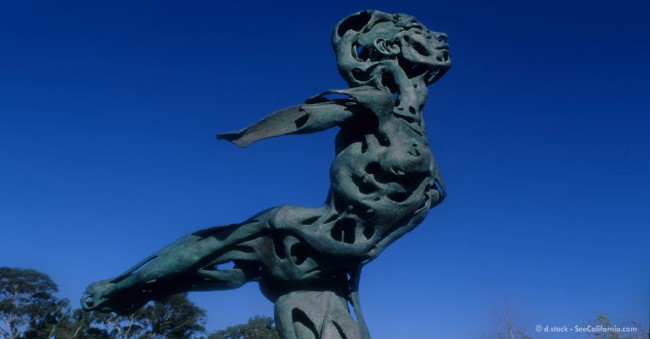 Huntington Beach, California --We've long called this surfboard "Surf Henge" based on the mysterious, famed Stonehenge in the UK. However, we recently discovered that a similar sculpture to the HB surfboard is called Surf Henge, and it is located in Imperial Beach in San Diego County.

The artists that seem to be credited with the giant concrete surfboard at the entrance to 2 beaches, Huntington State Beach, and Huntington City Beach, are listed as Surf Circle, Sounds of the Sea, 2002

Artist: Howard and Kathleen Meehan, and their work of art is a multimedia sculpture. Created during the construction of the the Hyatt Regency Huntington Beach Resort & Spa in 2002, we posted a photo taken during that era to show the Hyatt across the street in the photo still being built.

The surfboard originally had glued-on seashells--many fell off in the first year. Huntington Beach City Council members approved the installation so it is fair to say it was art done by committee. A suggestion to  pipe in the the sounds of the sea at this giant concrete slab that commemorates surfing in Huntington Beach wasn't approved. Since the location is a busy street corner, what you mostly hear are cars, trucks and vehicles passing by on PCH.

The art piece shaped like a giant surfboard and standing probably 15 feet tall is comprised of two columns of cement with a cement surfboard balanced symmetrically atop them, stationed in a circular sand lot.

The concept, we presume, was to base the design on Stonehenge, a prehistoric monument in Wiltshire, England. Stonehenge is composed of earthworks surrounding a circular setting of large standing stones. After Huntington Beach's version was unveiled, tourists began trying to stand under the board sculpture to take their photos, but discovered one big problem. The sculpture stands so tall as to not fit into most photos. Since it is positioned near the highway, photographers cannot step out from the object and people to show the size and scope.

Surrounding the surfboard in the air, and the sand lot, are short little benches with excerpts of T.S. Elliot's "The Dry Salvages".  Here is what appears on the bench seating:

The sea is the land's edge also, the granite

Into which it reaches, the beaches where it tosses

Its hints of earlier and other creation

The sea has many voices