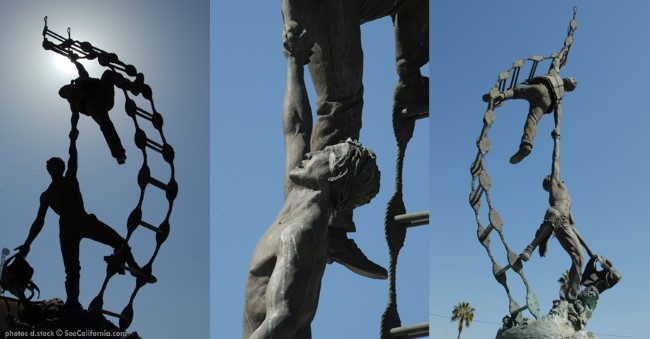 A prominent sculptor, Jasper D'Ambrosi, made one final, great tribute before he passed away. The Wilmington, California artist died before starting the clay model of Jacobs Ladder, seen in the San Pedro gateway plaza near the Port of Los Angeles.

His creation of the original design was finished and accepted in early 1986. Sadly, D'Ambrosi died on August 1 of the same year. The enlargement of the original concept was completed by his sons, Marc and Michael as a tribute to their father.

Jacobs Ladder was cast in bronze at the family foundry in Tempe, Arizona in 1987. The memorial was donated by the City of San Pedro. (San Pedro is actually part of the City of Los Angeles, and has its own representative in L.A. city government.) $700,000 for the project came from private donors. The statue sits atop a large fountain and is surrounded by a plaza encompassing a long stretch of sloped seating which includes beautiful marble and plaques.