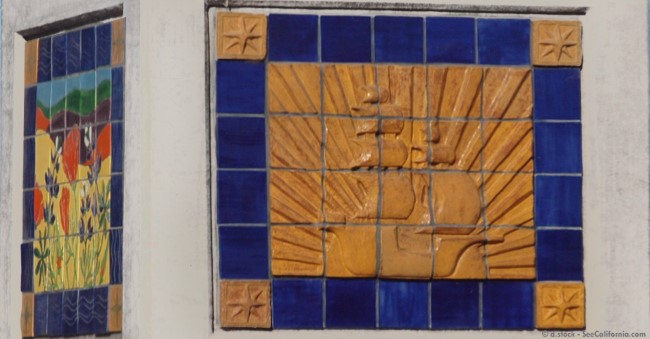 While Christopher Columbus is celebrated in the U.S. for his discoveries and ship named Santa Maria, he was not the first European explorer to reach North America by ship.

Santa Maria, California on the Central Coast was first called Grangerville, then Central City, but finally settled on the name Santa Maria when its mail service got mixed up with Central City, Colorado delivery. Symbols around the city sport a Spanish sailing ship used by Christopher Columbus who traveled on behalf of Spain, and arrived in North America in 1492.

One mural of the Spanish ship that was the largest of three, the Nina, Pinta and Santa Maria, is made of tiles set into a bridge edifice at an overpass of I-101.

The City of Santa Maria is near the Pacific Ocean but doesn't have land holding on the ocean, nor does it own or operate a marina in which you might see a ship associated with the city.

According to one source, the name actually came from a settler, Juan Pacifico Ontiveros, who called his property by that name. The name Santa Maria actually reflects the Hispanic culture that makes up nearly 50% of the population of the city of 100,000+ residents. Nearby city names include Santa Barbara, San Luis Obispo and San Simeon.