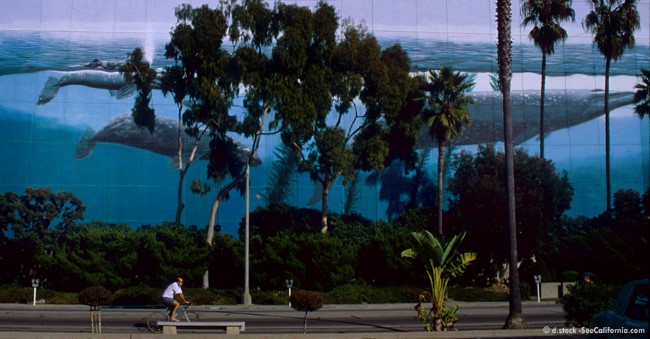 Wyland and Long Beach Dignitaries Dedicate, Earth, the Blue Planet on the Roof of the Long Beach Arena on Earth Day

LONG BEACH, CALIF. - What started as a simple touch up in 2009 ended with a brand new mural that can be viewed from space. Famed environmental artist Wyland returned to Long Beach to restore Planet Ocean, a mural he painted 16 years ago that wraps around the Long Beach Arena and has been recognized by Guinness Records as the World's Largest Mural.

At the rededication ceremony for Planet Earth, Wyland announced that he planned to paint a mural on the roof of the Arena, spanning three acres, with the project complete in less than 24 hours. He did just that, timed as a gift for Earth Day. "With more people and more demands on a limited supply of resources, our world is getting smaller," the artist says. "This is a way of celebrating what we have and a reminder that we all have to work together to protect it."