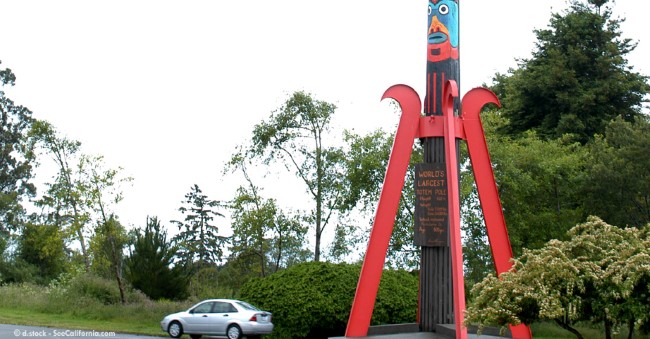 It is fairly likely that when you visit California's redwood coast and arrive by air, you're going to be close enough to the World's Largest Totem Pole to visit it after you touch down at the Artcata/ Eureka Airport in McKinleyville. Don't ask why the airport is in one community and is named after two nearby cities. Just trust that you will find the totem pole quite amazing and worth a photo or two.

Worlds Largest Totem Pole is located near the McKinleyville Shopping Center so you can also grab some groceries from the store, and shop a little before you hit the road for redwood coast exploring.

The totem pole weighs 57,000 pounds and stands 160 feet high. It was carved from one redwood tree and erected in 1958 or 1959 as a landmark for the then new McKinleyville Shopping Center. Ernest Pierson, Warren Fridley and Joan Nelson carved the pole.  Next to the World's Tallest Totem Pole is a grass lawn and gazebo. The spring Easter Egg Hunt is held at the shopping center annually.

There have been disputes as to whether it really is the tallest totem pole or not, but it doesn't matter to locals who will continue to call it the World's Tallest. And when you crank you neck to see the top, it is quite impressive. But it is just a starter for the tall trees that await your inspection in a land that is home to the tallest trees in the world.