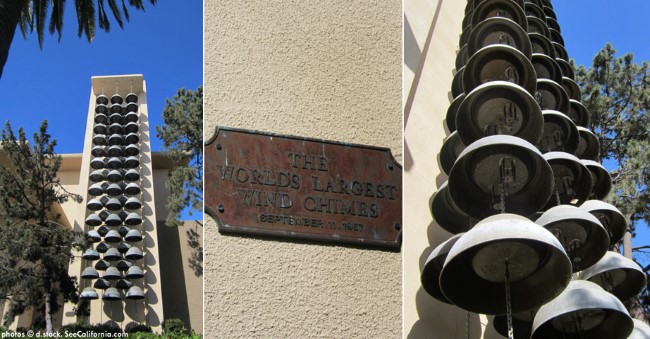 Other unique and crazy California attractions include: World's Biggest Thermometer,

When the wind blows in front of the Macy's store at Fashion Island in Newport Beach, you may want to stand back from the biggest wind chime in the world. The sound resonates and 40 to 50 decibels, some say.

We were a bit nervous to stand downwind of the giant chime structure as the Santa Ana winds blew on a Southern California day. Fortunately, the winds weren't making their way to the chime and the sounds we heard were really quite pleasant--even a little subtle.

Fashion Island Wind chimes located as you drive up to the front of the mall from Pacific Coast Highway are located at the  southwest entrance to what has been several different department stores during the lifetime of the chimes. Made of  bronze, the installation takes up an entire panel wall of the building and are considered a sculpture created by mural artist Tom Van Sant. They aren't his only piece of artwork but are certainly one of the most enjoyable because they make sounds. The chimes were installed in September 1967, and set a Guinness Book of Records as the world's largest wind chime.

Bell-shaped domes cover all the wind chime pipes from view and reduce the overall volume. Though having over 50 domes and over 300 chimes, some challenges were overcome in creation of the art.  Engineering and architectural challenges have never gotten in the way of Tom Van Sant's imagination and creative process. He has excelled in the use of science to create art.


Fellow, MIT, Center for Advanced Visual Studies
Founding Director, Los Angeles Mural Conservancy
Board of Advisors, The International Museum of 20th Century Arts
Board of Advisors, Artists Equity Association
Instructor, Santa Monica College Community Division
Art Advisory Committee, Los Angeles Department of Cultural Affairs
Van Sant is a sculptor, painter, and conceptual artist. In thirty five years of professional work he has executed over sixty major sculpture and mural commissions for public spaces around the world. These include the international airports of Honolulu, Taipei and Los Angeles, the civic centers of Los Angeles, Newport Beach and Inglewood, and corporate centers in Taiwan, Manila, Salt Lake City, Dallas, Honolulu and San Francisco. Van Sant has had fifteen one-man exhibits in the United States, Europe and Australia. His art is represented in public and private collections throughout the world.

INVENTIONS
1958 Use of natural colored stone mosaic pre-cast in epoxy resin for mural and certain wall application
1961 Electrodeposition of nickel, copper and bronze for lightweight, thin shell sculpture forming
1965 Development of polyurethane forms for concrete casting of sculpture relief in architectural application
1968 Development of forming procedures for exposed aggregate concrete casting
1974 Development and use of fiberglass and nylon fabric in airborne structures
1980 Development and use of solar reflectors for satellite sensor reception
1983 Use of scanning electromicrosopy for creation of sub micron imagery
1989 Design arid use of software for composting satellite mosaics
1995 Design of video projection systems for globe display technologies