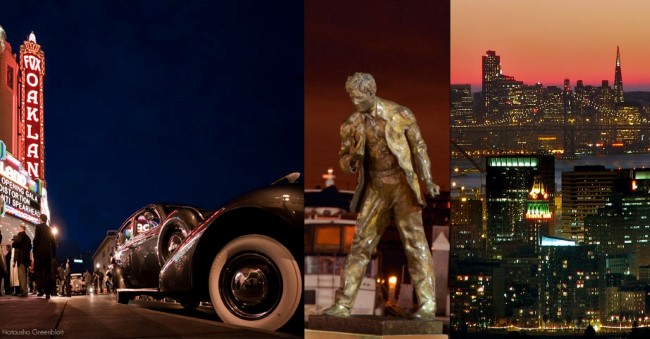 Exciting Oakland Is Getting Its Due!

Oakland is becoming one of the "happeningist" cities in America. The New York Times calls it, "The #5 Top Destination to Visit in the World." Forbes says the city east of San Francisco is one of the Coolest Cities in the Country.


This impressive, and increasingly recognized city is getting its plaudits for a variety of reasons, including everywhere you look, there are exciting and diverse things to do.

You can ride horses in the Oakland Hills; fly through the air at the Trapeze Arts circus school; learn to juggle in the Kinetic Arts Center, be charmed by a mighty Wurlitzer organ before Saturday films at Grand Lake Theatre; mingle with Miss Muffet at Children's Fairyland; take a cruise on the USS Potomac (President Franklin D. Roosevelt's 165-foot "floating White House"); get your steps in the groove at Linden Street dance Studio; become an actor for the day with the Oakland Pan Theater improve group or munch on yummy Japanese food while listening to legends like Natalie Cole at Yoshi's 330-seat jazz and music club.

Not only is Oakland a diverse (125 languages are spoken here,) "happening place" now, but it always has been. Its rich history includes being the western end of the famous Transcontinental Railroad, which linked the East with the West.

There always have been phenomenal artists, writers and poets who hung out in Oakland. (ArtPlace America says it's one of the Top 12 Art Destinations in the country.) So it's no wonder that Ina Coolbrith was selected Oakland librarian in 1873--a position she would have for nearly 20 years.

The literate lady poet corresponded with the likes of Alfred Lord Tennyson, Henry W. Longfellow, was a close friend of Mark Twain and John Muir, and even became California's First Poet Laureate. But perhaps her finest accomplishment was motivating and mentoring children (like Isadora Duncan, who became an internationally-famous dancer, and many others).

She had a special fondness for youth, listening to them, understanding them, inspiring them to reach their potential and make their dreams come true.

The gifted woman, who had come to California in a covered wagon at 10, really changed the life of one poor, little 10-year-old boy with low self-esteem. In 1886, she quietly befriended this shy fellow, who came daily to the library for books and her words of encouragement.

Ina praised him for what he chose to read, discussed the subjects, encouraged him to think, built his self-esteem, and helped develop his abilities as a reader and a writer. With her constant, positive assistance, he was motivated to succeed, and one day he did just that, emerging as best-selling author, Jack London.

Twenty years after first meeting Ina, Jack wrote her saying, "If you only knew what your encouragement meant to me, how proud you made me feel." He called Ina his "literary mother" and said no other woman ever affected him like her.
His "Call of the Wild," is still a hit with schoolchildren and adults. Jack's definitely one of Oakland's favorite sons and remembered with the legendary Jack London Square, a wonderful waterfront business and entertainment district, known for delicious food and a bronze statue of the author. It's also the site of Heinhold's First and Last Chance Saloon, Jack's favorite bar, which still delights its customers.

As for his favorite mentor, Ina is part of an incredible 52-foot long, 25-foot high monument, "Remember Them-Champions for Humanity," unveiled on May 31, 2013 in downtown Oakland's Henry J. Kaiser Sculpture Park.

Sculptor Mario Chiodo, an Oakland native, chose Ina (and others depicted) "because they share the common threads of courage, perseverance, education, sacrifice and a sincere desire to strive for a better life for all."

The remarkable poet and inspiring librarian, who died in 1928, is buried in Oakland's Mountain View Cemetery. In 1986, The Ina Coolbrith Circle (of poets, writers, historians and artists) put a beautiful headstone honoring her atop the grave.

While we're on the subject of history, be sure and visit the magnificent world class Oakland Museum of California and the impressive Oakland Aviation Museum. To find out more about this amazing city, check out visitoakland.org.