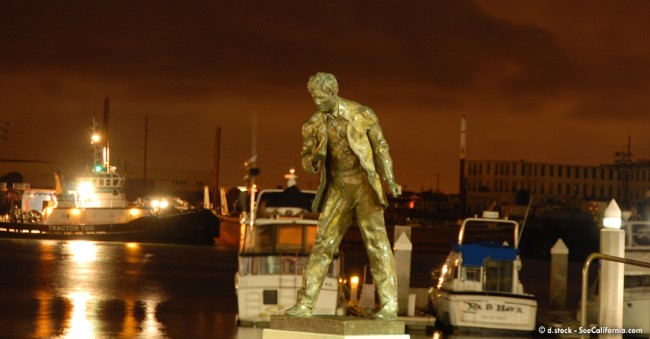 Oakland in San Francisco Area sits across the bay from downtown San Francisco. It has a rich history and much character in places such as Jack London Square where you will find the statue of the famous California author, Jack London. In the very square where shops, dining and a weekly farmer's market is held, there's an unbelievable old shack that's a bar which has been in existence for over 125 years.

Heinhold's First and Last Chance Saloon along the waterfront at Jack London Square is a shack. Some even call it a dive bar. Built out of the wood remnants of an old whaling vessel in 1880, the humble establishment has been in existence since 1883, serving the likes of everyday folks and more prominent guests such as Jack London.

Oakland is a tourist destination with great arts, entertainment, a farmer's market, eclectic neighborhoods, and one of the highest crime rates in California. Use common sense when visiting. The weather is Mediterranean and the best advice is to address in layers and take heavier jackets in the winter months (November - April).

If you seek seclusion, you may want to find another place to go. Heinhold's First and Last Chance Saloon is for those who embrace Oakland's living past.

Oakland is a sports mecca- featuring three professional ball teams. It is the only California city to gain such a distinction, in fact. Oakland A's baseball team, Oakland Raiders football team, and NBA Golden State Warriors pro basketball team all are based in Oakland, which explains why you often will see banners on light posts promoting the sports seasons.

Beyond the sports, the science museums, arts, culturally-diverse mix of population with hundreds of events to celebrate everything from Christmas to Kwanzaa, you'll find dining, shopping and the ever-present bay alluring.

In San Francisco's East Bay city it is hard to top the beauty of Lake Merritt, America's only natural salt-water lake located in the heart of a city. As the largest urban saltwater lake and first state game refuge, Oakland looks and feels like a smaller version of Chicago's Lake Shore. The lake located smack dab in the center of the city is full of activity that includes kayakers in bright red or blue boats, a gondolier providing romantic rides, and the unique "Necklace of Lights". The lake's 3.5-mile perimeter strung lights were restored in 1987 following over 40 years of darkness as a result of World War II blackouts.

A paved path surrounds most the lake where you'll see strollers, joggers, and families feeding ducks on the grass next to the lake.

This San Francisco East Bay city of Oakland has many attractions and things to do. Among them are them are events & shows at the Oracle Arena, Oakland Ballet, Oakland Zoo, Oakland Museum of California, Chinatown, jazz at Yoshi's, Paramount Theatre, and professional baseball, basketball and football all in one city! You don't get more American than Oakland!

Getting to Oakland: You can fly into Oakland International Airport, take a train, or come by car.

Oakland has a handful of places and markers signifying spots and attractions on the National Register of Historic Places. Here are a few.