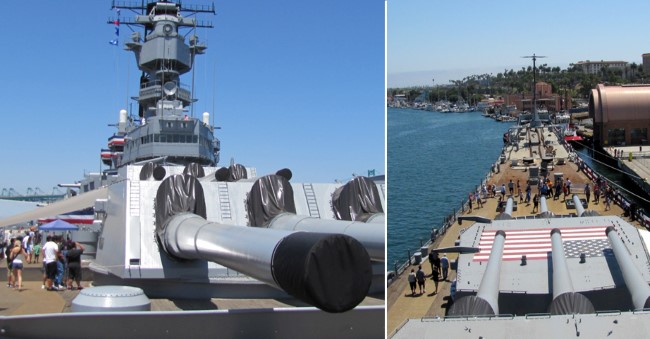 
SAN PEDRO, CA--There's a reason more than 45,000 people from around the World climbed aboard the USS Iowa within the first month at its new home (Berth 87). You've got to see its astonishing outside, interesting inside and learn the amazing history of this World War II-Korea-Cold War veteran battleship to really appreciate the still sturdy, 70-year-old warrior's significance.

Inside its Theatre, you'll see an incredible computer-generated film that brings the combat veteran to life. Wargaming.net magnificently recreated the ship's role in supporting American landings at Okinawa, Japan in 1945. The company also is developing a Game Room where visitors can guide warplanes to defend the Iowa from enemies.

Walking through the ship, you'll see fascinating exhibits and understand why it's nicknamed, "The Battleship of the Presidents" (FDR, Reagan, Bush). During the Second World War, the senior Bush was a Navy pilot, who said when he looked down and saw the Iowa, it gave he and his fellow flyers confidence in their missions. It's interesting to see the bathtub for the disabled FDR, when he was on his way to Tehran to meet with Stalin and Churchill.

You'll stand in awe alongside the 16-inch guns that could send shells 24 miles away to destroy enemy ports, trains, bridges and protect troops under attack. Each gun could fire two rounds per minute. Also nicknamed, "The Big Stick," the vessel had the most destructive guns on any American warship. "The Iowa could lay out more ordinance in 1 1/2 hours of firing than three waves of planes from aircraft carriers and pilots couldn't be shot down," explained Dave Way, the friendly Curator for the non-profit Pacific Battleship Center. For the past 10 years, the Iowa, which was launched in 1942 and decommissioned in 1990, was resting in a Moth Ball Fleet in Suisun Bay, east of San Francisco. The Battleship Center was awarded custody of it in 2011. It arrived in its new berth at the Port of Los Angeles in June of 2012.

Way said during the Korean War, the Iowa fired 4,500 shells, twice as many as she did in WWII. He said that, although unlikely, "because of the Iowa's guns, she technically could be recalled to action until 2020, if needed."

Onboard, you'll see upclose the Captain's Quarters; the "Top of the House" (where periscopes and lookout holes helped guide and protect the ship during battles); the Wardroom (where the officers ate and Bob Hope and Ed Sullivan once told stories); the 18-inch steel bridge (where the captain was stationed during battle); the Galley and Mess (over 8,000 meals were served daily); a variety of impressive Weapons Systems, plus other fascinating areas of the ship.

The Iowa, named after and supported by the state of Iowa, is one of 49 battleships the United States has built since 1893. The Iowa, the greatest fighting ship of its time, also is the name of a class of battleships, including the New Jersey, Missouri and Wisconsin. The Iowas were faster than previous battleships and able to stay with aircraft carrier task forces in WWII. Their anti-aircraft firepower ensured carriers were not sunk.

You'll see the armor around the ship that protected it even when a Japanese Shore Battery hit it, causing only a slight hand imprint size spot on the Forward Portion of Turrett II. The impressive vessel that's almost three football fields long, was not only heavily armored but fast, capable of traveling more than 33 knots (38-40 mph). It also was sometimes called, "The Armored Oiler," because she could carry 2,400,000 gallons of fuel, Way said, and refuel destroyers and frigates at sea.

You'll learn about Victory (sometimes called "Vicky" or "Vickey"), the first Iowa commander's dog, who joined the ship in 1943 and logged more than 200,000 miles at sea. The canine even befriended FDR on his trip across the Atlantic.

The Pacific Battleship Center eventually would like to create a museum on land to honor all battleships which played such a critical role in our nation's freedom. We congratulate the Center on what a wonderful job they've done so far and what they will be doing once they get the necessary financial and volunteer support from the public and businesses.

I could go on and on about the fascinating ship and how it was modernized over the years but you really need to grab your family and come down and see it for yourself. You'll be glad you did. If you have a valid Iowa Drivers License, you can board the ship for free. It's open every day of the year, except Thanksgiving and Christmas.