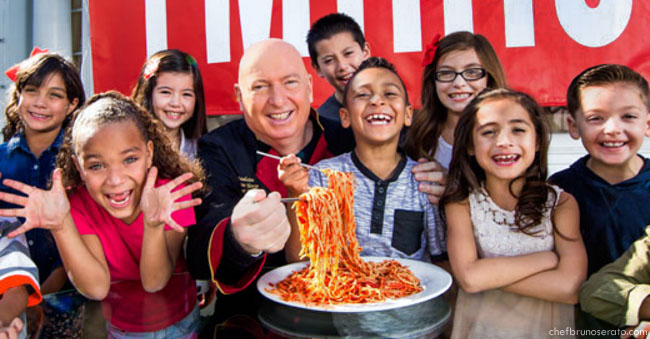 To the underprivileged kids he feeds, to the families he has helped into apartments, to the youth he graduated from his Hospitality Academy, Serato is a life changer—a real lifesaver and an angel to many.

Thanks to the humble man's inspiring efforts, over 2 million free meals have been provided for underprivileged kids; 202 needy families have been housed; and more than 60 youth have graduated from his academy.

Through poverty and many trials, including his restaurant burning down, Bruno has overcome adversity throughout his life. He grew up in a loving but poor family — his Italian parents worked in vegetable fields.

In 1980, speaking very little English, he arrived in the United States and moved in with his sister, Stella, and her husband, Fred. Through hard work, the Orange County immigrant went from dishwasher to busboy to being named "Southern California's Maitre' d of the Year," eventually owning the famous Anaheim White House Restaurant (where US Presidents, Hollywood celebrities and sports stars come to dine).

But his passion is most focused on helping the less fortunate, especially children, locally and globally. He guides a relentless campaign to end childhood hunger as well as to help youth achieve their dreams.

His life mission began with the love he learned in his family, especially from his devoted mama, Caterina. On April 18, 2005, Bruno, and his mom, were at the Boys & Girls Club of Anaheim, where they spotted a cute, 7-year-old boy named Billy, eating a bag of potato chips. This would change both their lives forever!

"That's probably all Billy will eat between now and bedtime," said Mike Baker, the club's executive director. "He could be a motel kid. Some of the boys and girls live in motels because their parents can't afford an apartment and they have no kitchen."

Caterina, who was visiting from Italy, told Bruno, "Why don't you make some pasta for these kids?"

They both hurried back to his restaurant, made tomato sauce and rushed back with spaghetti for Billy and 50 of his peers. The hungry kids loved it and thanked them.

Caterina turned to her son and said, "Feed them again tomorrow. No child should go to bed hungry!" A mother's love was the beginning of Caterina's Club, which now serves underprivileged youth in 89 locations, in 29 cities (including at three Boys & Girls Clubs in Huntington Beach.)

"The simplicity of pasta sets the groundwork for small moments of joy and connections, when we look at each other over a meal and recognize we're all human beings with a responsibility—as well as a privilege—to care for one another," said Bruno, who has lived in Huntington Beach for more than 25 years.

His "Welcome Home" Program has paid the deposit as well as first and last month's rents for 202 families, who have escaped the motels and moved into their own apartments.

In his book, "The Power of Pasta, A Celebrity Chef's Mission to Feed America's Hungry Children," (Select Books, NY), the humble humanitarian, who relies on donations and volunteers, offers a variety of tips, including:

—Never Stop Helping Others, who are less fortunate.

—Never Forget Where You Came From.

—Do Something Passionate With Your Life.

—Have Faith in the Lord. Faith is food for the soul and everyone needs to eat.

—Always Listen, especially from your mama!

His inspiring book is a call to action to end childhood hunger. His influence has helped start programs in other states (like Illinois, New York and Texas) and other countries, including Mexico.