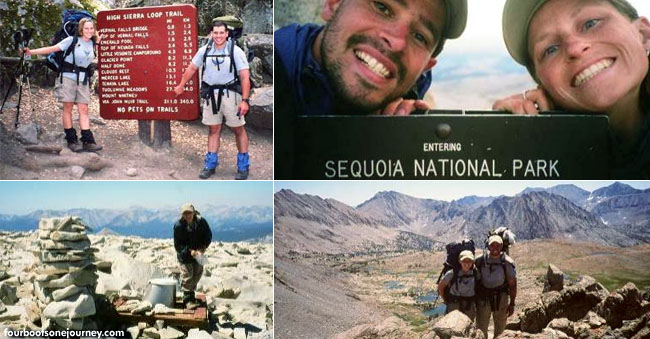 Synopsis: Beth Alt's brother died and the distance runner was devastated. Her husband, Jeff, thought that a hike would help his wife. He planned a trip that would remove both him and his bride from their comfort zone. Beth enjoyed fine hotels, spas and creature comforts, not sleeping bags, backpacks and freeze dried meals. The author tells the true story about his hike with his wife and the lessons gained.

Most of us fantasize about taking that adventure of a lifetime, and some follow through, turning our dreams into reality. There are plenty of dangers to fear, and victories to be realized as we embark on that trip, be it an imaginary journey or the the real deal. Jeff Alt's California journey with his wife, Beth Alt, held promise of many challenges and eventual rewards as the couple decided to hike the entire John Muir Trail, all 218-miles of rugged remote mountain terrain.

The chronicle of Jeff and Beth's experiences in a book, "Four Boots, One Journey", is an entertaining story describing the physical challenges traversing three national parks, including the summit of Mt. Whitney, the highest mountain in the contiguous United States. It is a journey that many hikers on the Pacific Crest Trail avoid because of the difficulty. The Alt couple's story is filled with humor and positive messages encouraging others to embrace challenges as mechanisms for spiritual growth.

Was the trip easy? No. It was never meant to be a skip through the park. The Alts knew there would be times they would want to quit and turn back. But they persevered and now share some of their insights: