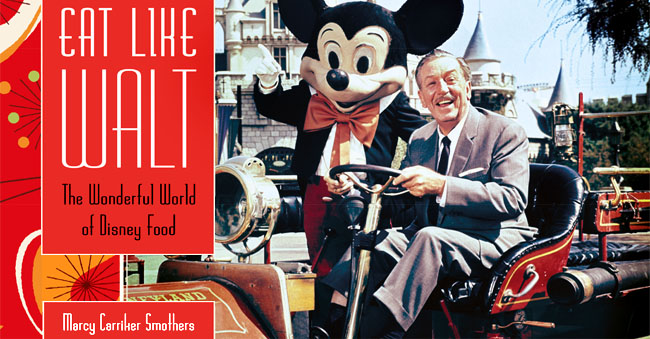 EAT LIKE WALT
The Wonderful World of Disney Food

One of the nicest, most lavish, fun, fresh, fact and photo-filled books ever written on Walt Disney has burst on the scene like a roller coaster car roaring into the sunlight from inside the Matterhorn.

"Eat Like Walt-The Wonderful World of Disney Food" by Marcy Carriker Smothers is without a doubt a first class keepsake which will find itself on the coffee tables of Disney lovers worldwide. You'll go back to it all the time, enjoying different tastes, different stories, different themes, different illustrations and different wows.

It's not just a fascinating, comprehensive full-color book about food and recipes from Walt's early life to present day Disneyland, it's a treasure trove of photos—many unpublished—showing Mr. Disney and illustrating his dreams, his philosophy, his restaurants, his joys, his family, his guests and his magic.

Although Walt was a simple eater with simple tastes, "he knew that food could be more than nourishment, it could be entertaining, too," wrote the author. He really envisioned a California Food Revolution, where the food would be as fabulous as the fun at Disneyland.

When it opened in 1955, there were 20 eateries at "The Kingdom of Good Eating." Nearly 4 million meals were served that first year. His love of wieners led to hotdog stands being placed throughout the park. More than 935,460 hot dogs were sold that year!

One of the all-time favorites was (and still is) the Monte Cristo sandwich in the Blue Bayou Restaurant, where you watch happy adventurers embarking on the Pirates of the Caribbean ride.

In 1957, the incredible Pancake Footraces began a seven year run—literally. Women, outfitted in long skirts and aprons, competed for $100 cash, dashing down Main Street from Town Square to the Plaza Circle. They carried 9-inch skillets with one pancake and had to flip that flapjack in the air four times over an 8-foot-high ribbon.

In 1955, The Golden Horseshoe offered "tongue-teasing" beef and cheese sandwiches, Chicken of the Sea Tuna Salad and more.

You'll see Walt's own handwriting describing his favorite foods such as Roast Lamb with Potatoes, Oyster Stew with Biscuits and his absolute love of coffee. You could purchase coffee all over the park for 10-cents (until after he passed away).

The author tells the story of how Walt handfed mice in his youth, while drawing cartoons in Kansas City, Missouri. Mice would look in his wastebasket for scraps of food. There was one critter in particular that he became attached too. It would eventually be named Mickey and become the most famous mouse in history!

Because of its size and content, this mouth-watering, eye-pleasing, recipe-revealing book really puts you and your palate inside the park, making you hungry and creating the desire to really visit Disneyland.

Readers will identify with Walt as a photo shows him stooping over to pick up trash and placing it in a can; sitting with his little grandson, Chris, and attracting a crowd, driving the Carnation Ice Cream Truck down Main Street.

You'll delight with actual recipes, including Monte Cristo, Chili and Beans, Clam Chowder, Chris' Cold Pie and so many more.

I'm sure there's a little bit of Walt in everyone lucky enough to have ever visited Disneyland. Even if you've never gone there, you will feel like you have with the author's passionate work, which is as exciting as the fireworks over The Magic Kingdom.

(The reviewer—a Pulitzer Prize nominee and author of 24 books—has been fortunate to see Disneyland develop since it opened. Though growing up in the Bay Area, he annually visited his grandmother, who lived near the park. His friend is Master Pastry Chef Paul Gauweiler, who performed his award-winning "magic" at the Disneyland Hotel for five years and created the amazing pastries for Club 33 for more than 20 years.)