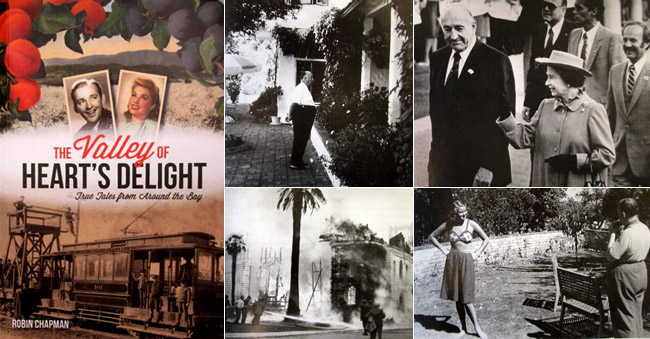 The Valley of Heart's Delight, True Tales from Around the Bay

As a longtime historian & journalist, I used to contribute interesting items to the late Pulitzer Prize-winning San Francisco Chronicle columnist, Herb Caen. He would have been very happy with the exhaustive research done by Robin Chapman, a former well-known television journalist in San Francisco & Washington D.C., for her latest presentation.

In her sixth book, Chapman keeps her literary fans delighted by continuing to dust off fascinating facts, not known by most of the public. Some of her tidbits, include:

Native Americans used to boil (what we call) California Poppies, or roast them on hot rocks before using the herb in salads. The Spanish sometimes fried poppies and turned them into perfume.

Alfred Hitchcock had a country home in Scotts Valley (Santa Cruz Mountains), which may have helped him in his development of a hit movie that still sends shivers down spines, "The Birds." In 1961, a strange occurrence was reported in the Capitola-Aptos area, not far from Scotts Valley.

At 3am on the foggy night of August 18th, residents were awakened as thousands of birds crashed into windows, slammed into roofs, light poles, & powerlines and even a deputy’s car, breaking his spotlight. Eight people were injured when they rushed outside and were bitten by birds! When this happened, Hitchcock was in Hollywood working on his treatment of "The Birds." He heard about the incident and called The Santa Cruz Sentinel to get a copy of their paper that had a headline, "Seabird Invasion Hits Coastal Homes."

Readers will learn about Sarah Winchester, known worldwide for her Winchester Mystery House in San Jose, having another house in Los Altos; sweetheart jewelry on display at the Moffett Field Historical Society & Museum; the writer’s trip over Silicon Valley aboard a B-24; famous Pulitzer Prize-winning author, Wallace Stegner, who taught at Stanford University; Bing Crosby helping the Los Altos Youth Center, and the reason why Swimming Champ & future Movie Star Esther Williams got married in Los Altos.

Local Hero Sam McDonald, grandchild of slaves, worked half a century at Stanford University, starting as a night watchman and finishing as superintendent of buildings & grounds. He helped some students pay for tuition and raised thousands of dollars raising funds for Stanford's Home for Convalescent Children. After he died in 1957, many were surprised to learn he owned a 400-acre ranch near La Honda, which he willed to the university. Today, it's a San Mateo County Park, named in his honor.

She shows how Saratoga resident John Kolstad spent decades working to preserve and restore Mission Bellmarkers that had been along El Camino Real & other sites for years. Many were installed in time for the Marker’s 2006 Centennial.

There are marvelous photos, including one of Queen Elizabeth II strolling with David Packard at the HP facility in Cupertino. Chapman also took several of the pictures, including one over Silicon Valley, while she flew on a B-24. Another is of the B-17G Flying Fortress "Nine O Nine" that visited Moffett Field in 2019, just a few months before it crashed.

Robin shows her fondness of the Bay Area, and how after many years elsewhere, she returned to where she grew up to help take care of her parents. Her love for the area remains and so does she.

Her book further explains how Santa Clara Valley evolved. There are very few commercial orchards left, most of the soil is now covered with homes, apartments, fast food outlets, office parks and other developments in what has become Silicon Valley. The author tells how some orchards were saved, like the Los Altos Heritage Orchard & the Central Park Heritage Orchard (Saratoga.)

If you like learning about the Bay Area, I recommend her other books, including California Apricots: The Last Orchards of Silicon Valley & Historic Bay Area Visionaries.