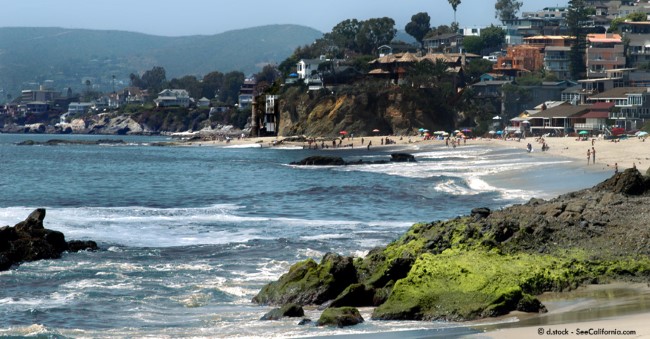 How would you like to enjoy a beach where it is Christmas all year long? Christmas Cove delivers on the gifts & joy throughout each and every season as one of Laguna's most treasured beaches located next door to Treasure Island Beach.

Getting to the beach requires descending a ramp on the north side of the Montage Resort. There's public parking and the grounds surrounding Montage are open to the public, so don't be shy about enjoying Christmas in January, July or August.

When you stand on the rocks that form the perimeter of the cove, you can look to the north and see Victoria Beach. Goff Cove is to the south.

Christmas Cove isn't a very large cove. Intimate and mellow, the beach is just big enough for handfuls of sunbathers. Locals like to go here, and people who want to read a book or relax opt for Christmas instead of Goff or Treasure Island. Both are more active beaches that people head toward mostly in plain view.

One of the things you might like to do when you're searching for meaning and special traditions to celebrate the holidays is to head to Christmas Cove Beach. Put your name in or make reservations for the restaurant dining at Montage Resort, then wander down to the cove as part of your outing. The rocks nearby are brimming with sea life, urchins and known for tidepooling.