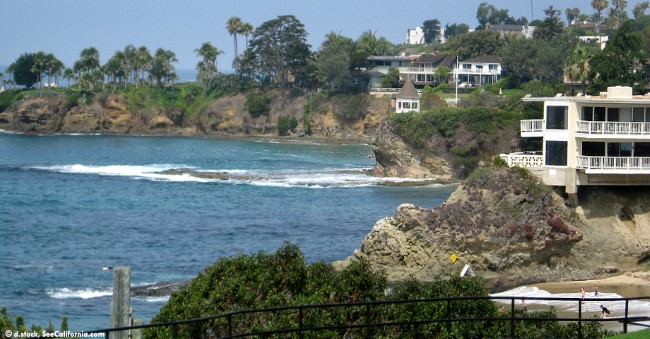 Diver's Cove things to do: Swimming, skin and scuba diving, and body surfing

Things to NOT Do: The rocks to the south separating Diver's Cove and Picnic Beach should be avoided at all times. Do not take, collect or disturb any of the marine life, rocks or shells. Fishing is not allowed at this beach.

Diver's Cove beach on the north side of the city of Laguna Beach is one of the first beaches as you enter from the Newport Coast on Highway 1. The beach is a cove, to be exact, with a small beach for sunbathing at low tide. Tucked down in a small cove surrounded by a housing on one side and a public park with Lawn Bowling on the other, you must descend a ramp and stairs to access this diving beach.

It is the final of four beaches to permit diving on the northern portion of the city. As you arrive in Laguna Beach you'll drive past Crescent Bay, Shaw's Cove and Boat Canyon before arriving at Diver's Cove.

The beach is quite short, approx. 300' long, and borders Picnic Beach near Heisler Park to the south.

Visitors beware! Hazards and rip conditions at this steep beach with consistent shore break keep lifeguards on watch during summer months. The rocks and point are closed during high tides or dangerous surf conditions. In lifeguard and surf lingo, the entire cove becomes a rip and pulls to the south during heavy surf.