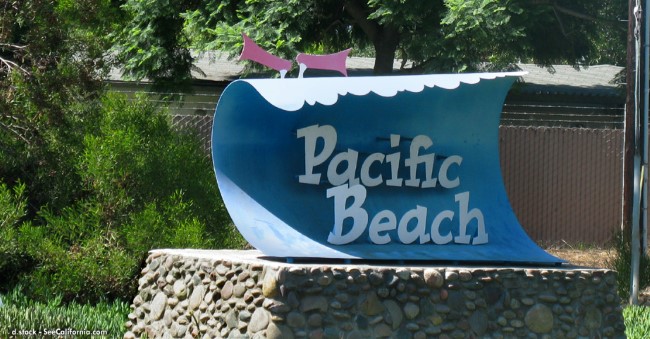 Pacific Beach is one of the neighborhoods of the City of San Diego. Ocean Beach, Mission Beach and La Jolla are other neighborhoods that look and feel like cities. The residents of many of these San Diego residential & commercial places sometimes form associations and/or business improvement districts to promote local commerce.

Pacific Beach is a blend of residential and tourist destination in California's 2nd largest city by population under Los Angeles, which is the biggest city. Signage helps locals and visitors know where they are in a display of local cool and pride.

Pacific Beach or "PB" features popular beaches that traditionally were known for their summer parties and drinking. Laws have been modified to prohibit beer and alcohol on the beach and in recent years, even eliminate the annual summer Beach Party at PB.

So what you can expect as a tourist is that every day seems like a party at PB? Sunshine, surfers, a hostel for travelers, beach hotels, cement bike paths, shops at the beach and the very relaxed San Diego vibe. Beach restaurants and pubs come to life at night and become the place to socialize, dance, listen to music, and maybe wander the beach as well.

When you enter San Diego and head for PB, you'll notice the urban feel of downtown and the busy I-5 Freeway disappear and you're suddenly driving along roads with bike stores, clothing boutiques, Starbucks--you name it.