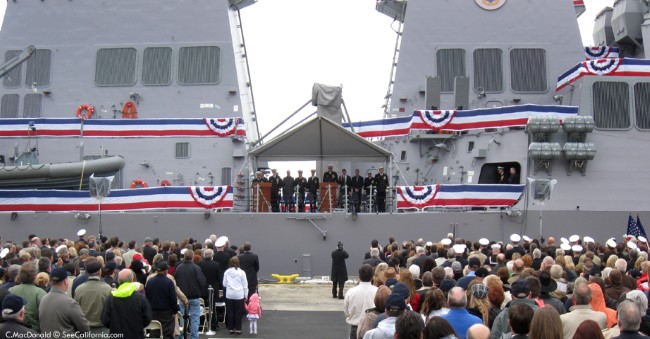 An OC First: Most Advanced US Destroyer Commissioned
By C. MacDonald

Seal Beach --NAVAL WEAPONS STATION, SEAL BEACH--Even the storm stopped to watch as the USS Dewey, the most technologically-advanced destroyer around was "brought to life" in a formal and festive ceremony of pomp and pageantry before more than 5,000 people here today. This was the first time a Navy ship was commissioned in Orange County, Ca.

On and off showers came to an abrupt stop as sunshine beamed from between threatening clouds, while Adm. Mike Mullen, Chairman of the Joint Chiefs of Staff, Congressman Dana Rohrbacher and other top officials helped launch the Dewey, a very special vessel, capable of fighting air, surface and underwater battles simultaneously. The Navy's newest ship can perform any mission, anytime, anyplace. It represents the fighting spirit of the military and all of those who have gone before to defend freedom and democracy around the World.

It was so exciting to see the hundreds of crew men and women proudly rush to their positions aboard the ship as it was officially "brought to life" in front of their families and friends.

Destroyers are known as "the greyhounds of the seas" and the Dewey's Combat System reportedly is the best, with the most powerful aerial radar on Earth. During its peak construction in Mississippi, over 900 people worked creating the guided missile destroyer, according to Bill Glenn of Northrop Grumman, the ship's builder. He said she has more than 355 miles of cable, 360,000 feet of pipe and 6,023 tons of steel.

Officials said the soul of every ship is the crew and the Dewey's highly trained team comes from all over the country. Its motto means "the will to fight from the heart." And heart is what it will need in these challenging times, according to Adm. Mike Mullen, Chairman of the Joint Chiefs of Staff.

"We can no longer operate as a single service or as a single country," explained Mullen. "We now need to operate as joint services in multiple country exercises. The crew on the Dewey is trained to do what is needed in any circumstance. They serve as our statesmen, our patriots and our warriors."

"They go away from their families for long periods of time to protect our families," said Congressman Rohrbacher. "I want to thank them for helping protect my family. I'm so grateful to these defenders and we must stand behind them!"

This is the third ship named after Admiral George Dewey, who led warships into Manila Bay and destroyed the Spanish Fleet in just a few hours, without a single American casualty on April 30, 1898.

The first destroyer Dewey was commissioned in 1934 and played a significant role in World War II. The second was a guided missile frigate, commissioned in 1959. It assisted keeping the torch of freedom alive during the Cold War.

Adm. Mullen, who started his Navy career 39 years ago as an ensign on a Long Beach-based ship, brought laughter when he said, "'Twitter' back then was what my heart did when I got a letter from home. We've come a long ways!"

The City of Seal Beach was thanked numerous times by Navy officials for its hospitality and support of the Navy. Over 50 ships a year are served by the Naval Weapons Station-Seal Beach. The Dewey is home-based in San Diego.