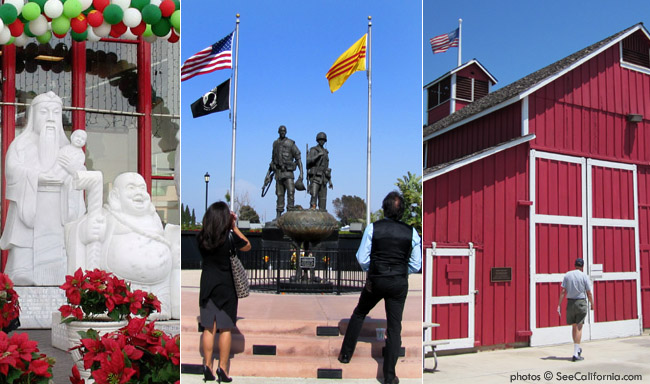 Westminster is one of the most popular cities in the U.S. for Vietnamese shopping and culture. Little Saigon has foods, shops, restaurants, and entertainment providing a familiarity to the Vietnamese culture, though there is also a small Korean shopping plaza nearby.

Vietnam War Memorial Sid Goldstein Freedom Park at 14180 All American Way has a Vietnam War Memorial. Tuan Nguyen, a renowned sculptor created a stunning statue, one of the few such tributes in the U.S. It, the shopping malls and a fantastic historical museum are our 3 favorite things to see in Westminster.

Recognized for its British style phone booths and clock tower in the civic plaza, Westminster is one of the most culturally diverse cities near the Orange County beaches. Hispanics also live and attend schools in Westminster, and the favorite shopping mall that people from surrounding areas enjoy is the Westminster Mall with a huge Target and a Macy's store, to name a few.

When visiting, Westminster is considered the affordable choice with hotels freeway close. The beaches of Seal Beach, Long Beach and Huntington Beach all provide the largest attraction only to Disneyland Resort which is not far away. Knott's Berry Farm also is about a 15 minute drive from Westminster.

Westminster accesses the San Diego Freeway (405) which has several exits that pass through the city and provide access to the streets below and next to the highway where hundreds of thousands of cars routinely pass by.