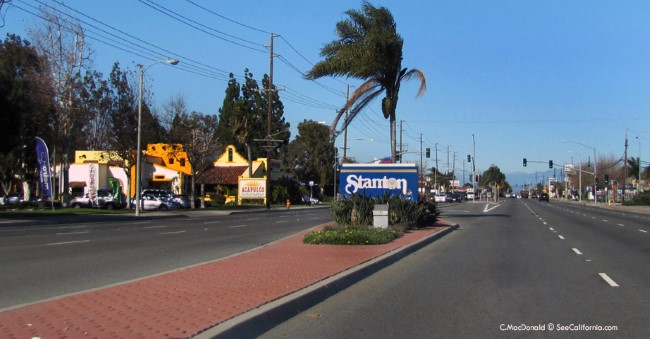 Stanton is an Orange County, California city approx. 12 miles from the beach. Drive directly down Beach Blvd. from Stanton to access the golden sands.

The City of Stanton is located in northwestern Orange County, enjoying a population of more than 39,000 in 3.1 square miles. Residents enjoy a small town community feeling and a proud history in a place that goes by the motto: Community Pride and Forward Vision.

For many tourists who visit the small city and stay in its Beach Boulevard hotels will do so generally because of a neighboring city's attraction: Knott's Berry Farm.

Stanton was incorporated in 1956 and has enjoyed growth and prosperity since that time. The formation of the city and its name come from a Seal Beach resident, Philip Stanton, who fought to keep the land from becoming a sewage farm. Prior to 1911, the community was known as "Benedict" but in that year the City of Anaheim proposed the creation of a sewage farm in this section of County land and ranchers called for help, which they received, successfully thwarting the efforts of the nearby city to dump on their valuable property!

One of the highlights to shopping is Stanton Indoor Swapmeet at 10401 Beach Blvd. (indoorswapmeet.net). The Swap Meet has shifted focus in recent years to become more of a shopping center where people can go to obtain a variety of services and purchase clothing, jewelry, specialty items, health supplies, fragrances and cosmetics on a regular basis, unlike a swap meet where you can find rotating vendors and items.

Nearly across the street from Stanton on Beach Blvd. is Adventure City, 1238 South Beach Blvd., between Ball and Cerritos, Anaheim, California. Hours vary, and admission is charged to access the playland filled with kids rides (adventurecity.com). Call: (714) 236-9300.

Then, there's Knott's Berry Farm next door to Stanton. It is a theme park with a long tradition of serving up good times and great home-cooking in Orange County (knotts.com).