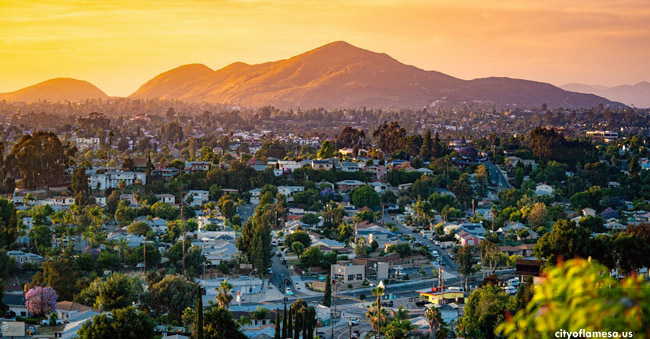 La Mesa, Jewel of the Hills

With a population of less that 75,000 and years in the making, La Mesa's history can be witnessed in historic homes and buildings, reminding current generations that we are newcomers to a place that has been around for over 100 years (founded in 1912.) In La Mesa you gain a sense of belonging.

The fantastic La Mesa Historical Society and its volunteers provide a living history through programs such as the McKinney House Museum, 8369 University Avenue (lamesahistory.com). You can also take one of their recommended walking tours to see historic buildings and learn each structure's story.

While retaining its small town charm, contemporary La Mesa offers many urban conveniences. When the bright red MTS (Metropolitan Transit System) Trolley service opened through La Mesa in 1989, it was the first rail passenger service since 1928. The Trolley connects San Diego's east and south county communities with San Diego's Downtown region. For a couple bucks you can hop on the Orange Line in La Mesa and head straight Courthouse Station within walking distance to most attractions downtown. See sdmts.com

In 2008 La Mesa greeted the new County Library and Post Office in La Mesa Civic Center and a new Police Station in 2010. Famous La Mesans to see and be part of the change have included three astronauts, sports athletes and the co-founder & CEO of Costco, James D. Sinegal.

Sports figures who have enjoyed the fine weather and lifestyle of La Mesa:

Other famous La Mesans include Actor Dennis Hopper, a graduate of Helix High. Most of us remember him from the movie, "Easy Rider," but he has over 200 film and acting credits with starring roles in Blue Velvet, Speed and Waterworld.

So, where do you fit into La Mesa? The nine-square mile city features beautiful people, parks, climate, history and amenities a mere 10 to 11 miles east of the City of San Diego. What's not to love about La Mesa? It IS the Jewel of the Hills.