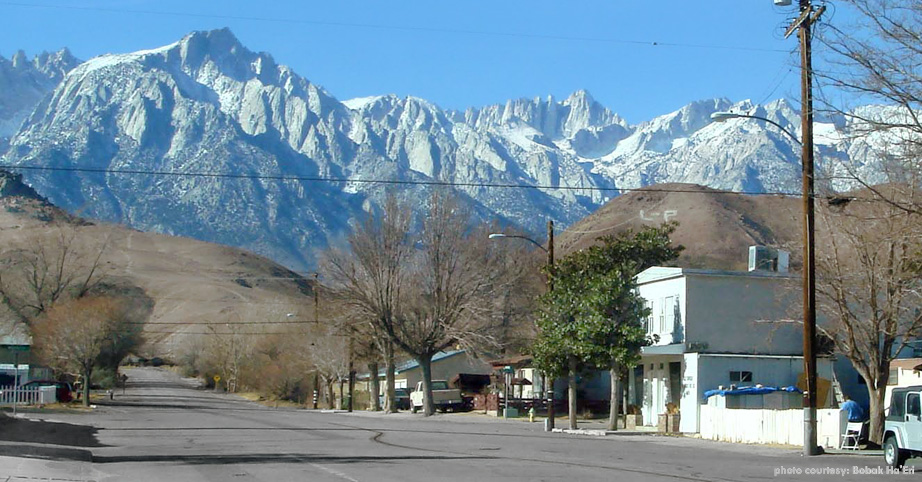 As part of the Mojave Desert, Lone Pine sits at the eastern base of the Sierra mountains at an elevation of 3,727 feet in the Owens Valley. Alabama Hills near Lone Pine provide the backdrop for many movies sets from the Western film genre, thanks to huge boulders, and the rugged landscape that looks impressive in real life and on film.

One of the most famous films with Humphrey Bogart was High Sierra, 1941. The movie's dynamic ending included a shoot-out at the base of Mt. Whitney. Beverly and Jim Rogers Museum of Lone Pine Film History commemorates Hollywood's role in Lone Pine and the surrounding desert. The Lone Pine Film Festival founded over 20 years ago is held usually in October, and features many of the great American-made Western movies with John Wayne and other Old West film heroes. lonepinefilmfestival.org

Surviving mostly as a tourist stop and intersection for many natural attractions, Lone Pine is part of Inyo County close to some of California's finest national parks. Mt. Whitney, popular with mountain climbers, Sequoia National Park with the world's biggest trees, Kings Canyon National Park, Mammoth Mountain, Death Valley National Park, and Yosemite National Park, as well as Manzanar National Historic Site (a Japanese American internment camp during World War) all are accessible no more than half a day's driving under normal conditions, from Lone Pine.

In history the town is known for the 1872 earthquake that killed nearly 10% of its 250 to 300 residents. The Sierra Nevada range and the Inyo Mountains dominate the views from the town, providing scenery that inspires. Lone Pine and most of the Owens Valley high desert climate ranges from the hottest days seeing averages in the 90's to daytime temps in the winter around 50's sometimes, and dipping below freezing at night.

One interesting note in history involves the Chumash Indians associated with California's Central Coast. They established trade routes originating in the Owens Valley, a little known fact. Lone Pine Indian Reservation doesn't serve the Chumash nation, however. The federally recognized tribe, the Paiute-Shoshone Indians of the Lone Pine Community of the Lone Pine Reservation is located on the south side of town on both sides of US 395, and is where some families and their ancestors have lived for more than 2,000 years (and probably much longer.)