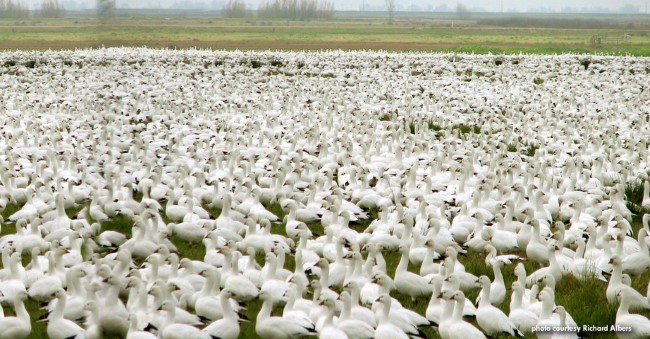 Los Banos (the baths, in Spanish) features the largest contiguous freshwater wetlands in California, attracting thousands of beautiful birds ranging from Snow geese to the towering 4-foot-tall Sandhill cranes. It is a must-see during your Central California drives along Interstate 5.

New events are coming your way in Los Banos. Be sure to check out the annual Los Banos Tomato Festival.

Los Banos makes its living primarily as a farming region. Once the word spreads about its ecotourism assets, that could change. The region not only attracts hunters and anglers, but with the disappearing wetlands habitats in the U.S., the area has increasingly received attention as one of the top spots to bird watch. Its amazing wetlands area contains a rare California Grasslands habitat with bird watching and nature opportunities to explore in San Luis National Wildlife Refuge. In this vast network of natural spaces are Kesterson, East Bear Creek, West Bear Creek and the Blue Goose Units within the Pacific Flyway, a major route for migrating birds. 30 species of waterfowl using the Complex include Ross' geese, Aleutian cackling geese, snow geese, green-winged teal, mallard, northern pintail, gadwall, American wigeon, northern shoveler, and white-fronted geese. The complex is an integral part of a mosaic of federal, state, and private lands in Merced County that together constitute the largest contiguous freshwater wetlands remaining in California.

One of the most exciting events each year is Crane Day, celebrating the return of the Sandhill Cranes to Merced County. Usually held in late October, refuge staff lead guided bus tours to showcase the Lesser Sandhill Cranes that make the Merced National Wildlife Refuge their winter home. This is the largest wintering concentration of Lesser Sandhill Cranes along the Pacific Flyway, with as many as 20,000 cranes spending the winter on the Refuge. The 4-foot tall birds with 6-foot wingspans breed in northern Canada, Alaska, and Siberia and mate for life.

The public is invited to view these magnificent birds and learn about their natural history and Refuge management through guided tours. fws.gov/sanluis

Things to see and do around Los Banos:

Blossom Trail is a seasonal event in which the roadsides are graced with blossoming fruit trees. The Los Banos Blossom Trail begins at the intersection of Hwy 152 and Volta Road, approximately 2.5 miles east of I-5.

Where is Los Banos: Located 26 miles south of the city of Merced in Merced County in the San Joaquin Valley, Los Banos is near the junction of Interstate 5 and State Route 152. Merced County's 2nd largest city (36,000+ population) is approx. 2 hours from San Francisco, Oakland, Sacramento and Yosemite National Park. The beaches and Pacific Ocean are a mere 90 minutes away at Monterey Bay.

How Los Banos was named: A spring that feeds natural wetlands in the western San Joaquin Valley provided the appropriate description for Los Banos, which means "the baths" in Spanish. In 1873 the Post Office Department selected Gus Kreyenhagen's trading post near Los Banos Creek as a postal facility, and named it Los Banos.

Farming tradition: Henry Miller, a San Francisco butcher, sought a better grade of cattle than available to his customers. With earnings from his shop, he launched a cattle empire. Acquiring 120 miles of land on both sides of the San Joaquin River, he formed the San Joaquin and Kings River Canal and Irrigation Company in 1871. He introduced cotton, rice and alfalfa to the valley and next sought to get a railroad to come through the region for transportation of his products. Agriculture remains the number one industry in and around Los Banos. A statue of Henry Miller is located in the plaza bearing his name at the intersection of Main Street (6th) and H Streets near the original site of the Los Banos Railroad Depot.

Randall Fawcett House, a Frank Lloyd Wright designed Usonian home in Los Banos is a rare example of this design style. Famed architect Frank Lloyd Wright designed the house set on a farm for Randall "Buck" Fawcett and his wife Harriet, who met Wright while taking an architecture course at Stanford University. Buck Fawcett was recruited by the Chicago Bears in 1944, but instead returned to the Los Banos farm that his father had homesteaded. The 1961 house includes battered and sloped concrete block construction with wings at 60/120 degree angles. It also contains a broad copper fascia and horizontal roof line that lays flat and long. A 12-foot-wide fireplace hearth rises to the left of the entrance of a unique and open space that incorporates 5 bedrooms and 4.5 baths.

When you go: Get information and a free visitors guide at Los Banos Chamber of Commerce at 503 J St. Los Banos, CA 93635, losbanos.com.