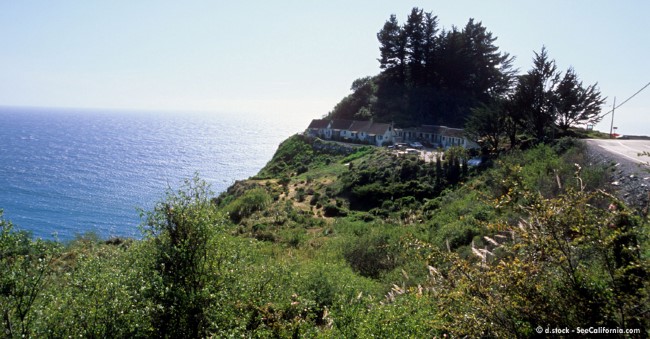 Lucia is a small place on a big mountain side in the Santa Lucia mountains of the Coast Ranges. You'll find it along a twisting, winding road on cliffs (sometimes sheer) above the Pacific Ocean. This bend in the road is comprised of a small community with a hotel, restaurant and gas station--but no cell phone service to speak of. Lucia Lodge has a land line (pay phone) for public use but no TVs to watch in rooms, though they do claim wi-fi Internet access is available to hotels guests.

The hotel accommodations are modest and remote. The cafe at the lodge serves lunch and dinner to the general public passing by--at a premium price! There's also a convenience store and picnic tables that are for the use of those who make purchases.

Built by the Harlan family, now the 5th generation, built the lodge that comprises the village of Lucia (lucialodge.com)

Lucia was named for the Santa Lucia mountains that surround it. Hugging Highway 1 on a Big Sur mountainside-- 48 miles from the entry point at Carmel, 30 miles from the southern entry at San Simeon, and approx. 22 miles from the Big Sur Valley--some want to stay and soak up the views. And if that's your desire, Lucia may be for you (though there are other places you can do so, as well.

While guests who arrive and check out the rooms at Lucia Lodge can be angry or astounded that the rates seldom drop between $150 - 200 for accommodations that would rank around 2 Star if AAA rated, just remember that thousands of travelers pass through, and this is really the only hotel around for miles. The views are priceless!

There is no direct beach access on this mountain top hotel, though an easy drive will get you to some favorite beach haunts in the Santa Lucia Mountain range. Sand Dollar Beach is approx. 9 miles south of Lucia, and offers tidepooling, surfing and hang-gliding, to name a few activities. Travel half a mile beyond Sand Dollar to discover Jade Cove, famous for jade that's been discovered there. Part of the Los Padres National Forest, there is no entrance fee. The jade is constantly replenished when storms break off chunks of the stone from an underwater shelf. Jade can only be taken when found below the high tide line.

There's a four mile corridor South of Lucia where hiking along ocean bluffs is possible. About 8 miles south of Lucia the Pacific Valley (complete with a school, camping, etc.) the terrain flattens, providing easier exploration. The closest hike to Lucia is Hermitage approx. ˝ mile south of town. A Catholic Monastery, New Camaldoli Hermitage, was established as the Camaldoli, Italy based order of Benedictine monks. It's a two mile paved road leading to the monastery with views of the coast as you arrive at the monastery. Hermitage Gift Shop is open 9-5 daily and the public can attend mass services at noon when the shop is closed.

Lucia is located in Monterey County at around 354 feet elevation on the western slopes of the Santa Lucia Mountains, which peaks at an elevation of 5,200 feet. Cone Peak is the highest point of the range. While Lucia is bounded by sheer cliffs, the trails and beaches to the south do allow access to the tantalizing, sparkling sea. Nearly 50 separate streams flow down the mountains to join the sea, making for often treacherous currents and ocean conditions in an area known for its rogue "sleeper" waves.

The Santa Lucia fir, coast redwoods, and a variety of trees and plants offer a landscape that's intriguing but sometimes not so friendly. Poison oak grows abundantly so hikers are advised to be on alert. During hikes you may also observe mountain lions, deer, other animals and birds make Big Sur their home. A California sea otter refuge runs the length of the coast, providing safe harbor for the sea otter, perhaps the most playful member of the coast's diverse marine wildlife.

Big Sur was first settled by Native Americans, but when immigrants from other countries arrived, homesteaders such as the Pfeiffers, Bixby family Anderson, helped bring activity and commerce to this more remote section of the California coast.

Tan bark used for the manufacture of tannic acidbecame a much-sought commodity, and during the mid-1870's landings were constructed for loading bark and redwood lumber onto ships.

Godfrey Notley's Landing, Partington Landing and Rockland Landing were among the new facilities built for schooners to load tan bark, limestone, redwoods, and even gold supplies during the region's brief gold rush. The Big Sur Gold Rush of the 1880's included construction of Los Burros Mining District with three stamp mills, and a boomtown named Manchester. During its heyday the town had four stores, five saloons, a dance hall, restaurant and hotel.

Even the 20th century experienced a Big Sur boom. While homesteaders had been allowed to live on parcels of land, commercial development along the Big Sur Coast began, appealing to hunters and anglers. Pfeiffer Ranch Resort and Hotel Idlewild were several ventures appealing to outdoorsmen.

Today, parcels of land are used for cattle grazing, public and private campgrounds, visitor accommodations, and the Los Padres National Forest. Big Sur Valley features the Big Sur Grange hall, Captain Cooper Elementary School, churches, a Monterey County Library, Post Office and Multi-Agency Conference Center. There are approximately 1,100 parcels in private ownership on the Big Sur Coast, with nearly two-thirds of the Big Sur coastal zone in public ownership under the U.S. Forest Service, the State Department of Parks and Recreation, the U.S. Navy, the U.S. Coast Guard and the University of California.