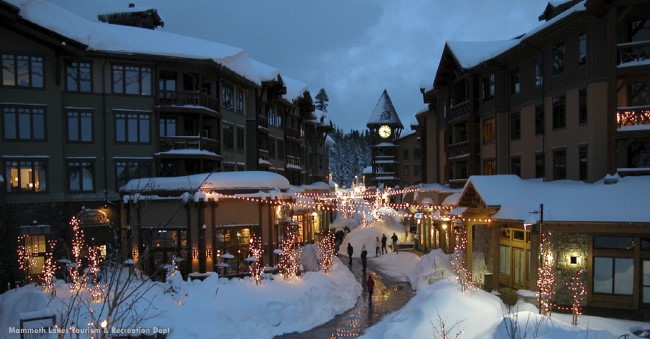 Mammoth Lakes, Calif.--California's Eastern Sierra Snow Ski and Snowboarding is some of the finest in California because of the incredible amount of snow that Mammoth Lakes gets each year. It actually has the highest average snowfall of any ski resorts in California, which means longer ski seasons and more powder when you go. Mammoth Mountain peaks at 11,053 feet and experiences an average of over 400 inches of snow caused by weather patterns from the Pacific that form over the Sierra. Mammoth Mountain is traditionally among the first ski areas to open and sometimes operates as late as the Fourth of July.

Mammoth Mountain is one of two ski resorts (the other is June Mountain 20 minutes north.) Both are operated by Mammoth Mountain so your pass is good at both. If the powder doesn't sell you, how about the thought that you could be skiing 11,000-feet above sea level, selecting your favorites among many ski lifts--9 high-speed detachable, 7 triples, 4 doubles, 3 gondolas and 2 surface lift pomas--and 150 trails. And the ski season often goes till July 4. 15% of trails are expert, 20% advanced, and the longest run is 3 miles.

Mammoth Lakes village is reminiscent of the style of Colorado ski resorts such as Vail, only the cozy town is very "down home" in its California wild and woolly attitude. Friends are easy to come by and hospitality is not measured by your pocket book in Mammoth where the driving force among the the guests and locals is a love of nature in their very own Sierra mountain high.

In Mammoth's village guests can stay in hotels & cabins, then hop on a chair lift right there outside the hotel door. This winter getaway is popular with not only extreme sports enthusiasts, but with families with kids who seek to share the love of winter sports with the children as they grow.

Spring brings greenery and waterfalls, while summers on the lakes include water sports and fishing, plus the most popular place in California for extreme thrills in mountain biking and motocross with an annual competition, Mammoth Motocross.

Fall is the most beautiful season and rivals any East Coast destination for the fall foliage leaf peeping vacation. The mountains are a different type of foliage experience and one that you don't want to miss if you are a nature lover.

Where is Mammoth Lakes? Getting there:

Located in the Eastern Sierra Nevada mountain range in Mono County, Mammoth Lakes is approx. 325 miles north of Los Angeles, and about the same distance east of San Francisco. U.S. Highway 395 from the north and south and Interstate 80 and Hwy 50 from the east and west access the mountains. State Highway 120 and State Highway 108 are open in the summer months only.

Mammoth Lakes has become so easy to get to...while it is no more than a five or six hour drive from most major cities in California, you can fly direct from LAX (Los Angeles International) or SFO (San Francisco International) airports and be there in about an hour. That means you can easily take a few days off, or trip it for the weekend and be back in the office on Monday. There are complimentary shuttles from the airport to the village hotels, so you don't need to rent a car when you fly! Go Mammoth!