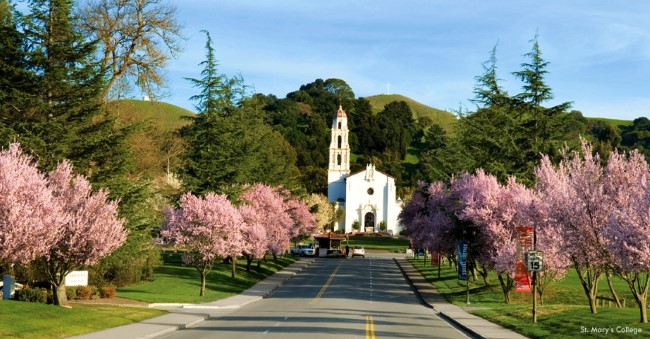 Incorporation as the Town of Moraga in November, 1974. Pictured is St. Mary's College of California in Moraga.

Moraga in San Francisco Bay Area's East Bay county of Contra Costa is a scenic town with countless charms and a wonderful lifestyle. Set in the lush, rolling hills where the Miwok used to enjoy abundance, Moraga is part suburban commuter community, and a destination for students seeking to continue their higher education at St. Mary's College.

The town has lots of things to do, including a Film Festival, Triathlon, Pear and Wine Festival, holiday celebrations such as Easter Egg Hunt, 4th of July and Christmas, and even a fantastic Cinco de Mayo Fiesta at the beautiful Hacienda de las Flores.

The hacienda hosts many special events including weddings, celebrations, and all sort of activities both sponsored by the city, Chamber of Commerce, and privately with rentals available to the public. Hacienda De Las Flores - 2100 Donald Drive, Moraga, CA 94556 Phone: (925) 888-7045, moragahacienda.com

The Rheem Theatre - Built in the late 1950's by Donald Rheem as a single screen movie palace with a large stage and dance floor, it was closed during the 1970's, and reopened as a performing arts venue in the 80's. During a remodel in the in the late 90's, three additional screens were added thus making the Rheem Theatre a 4 screen multiplex. Though the theatre has been consistently updated, it still retains its original art deco feel with Zodiac Style art in each house. Location: 350 Park St., Moraga, CA 94556 Box office: (925) 388-0751, lamorindatheatres.com

The Town of Moraga is named for Joaquin Moraga, the grandson of Joseph Joaquin Moraga who was second in command of the Anza expedition of 1776, the founder of San Francisco, Mission Dolores and the founder and first commandant of the Presidio. Joaquin Moraga, who also served in the military with his father Gabriel Moraga at the Presidio of San Francisco, left the Army in 1819. He and his cousin, Juan Bernal, received a 13,316 acre land grant from the Mexican government in 1835. The original land grant, known as Rancho Laguna De Los Palos Colorados (Ranch Of The Lake Of The Redwoods), included parts of Orinda and Lafayette and the communities of Canyon, Redwood, Rheem, and Moraga. Joaquin Moraga built an adobe on a hill overlooking the Moraga Valley in 1841. The adobe home still stands on a knoll in Orinda above Miramonte High School with a poplar tree-lined driveway going up to the house. It was designated a California Historical Landmark in 1954. It is probably the oldest existing building in Contra Costa County.

The original adobe was built with three rooms; living room (salon-dancing room), bedroom, a long verandah, and an outside kitchen. In 1848, when Joaquin's son Jose De Jesus moved in, the adobe was expanded to accommodate a large growing family. The Don Manuel family made considerable changes in a remodeling done in the 1960's. The adobe today is a private home and not open to the public.