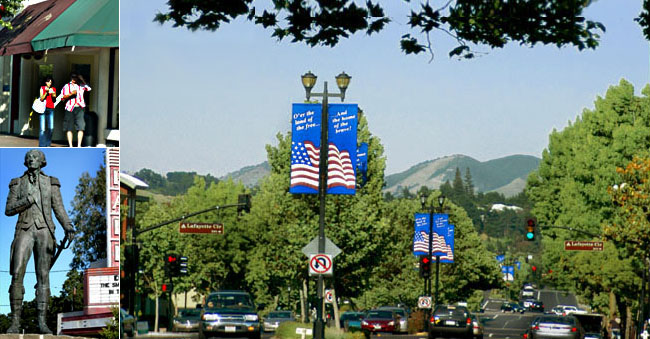 If you are thinking of moving to Lafayette, there are several things you need to know. The housing is not inexpensive, though the living is fantastic in neighborhoods surrounded by trees, usually located on hills and often overlooking Mt. Diablo or some scenic vista.

Lafayette, itself, honors a famous Frenchman, though the town has gone by many names in its long history. Benjamin Shreve came to Lafayette after failing to make a fortune in the Gold Rush several hundred miles away. He built and ran Lafayette's first school, and in 1857 Shreve became postmaster. He wanted an official name and hoped to call it Centerville. The town had been called Acalanus, Dog Town, Brown's Corner, Brown's Mill and Centerville previously. Read more about Lafayette's history.

There was another Centerville in California and La Fayette was accepted by the majority as its assigned name and in 1932 it was changed to today's spelling, "Lafayette".

Shady oak trees in a valley east of San Francisco, Oakland and Berkeley provide the scenic setting for this sleepy hollow town with a small downtown shopping area. Lafayette enjoys weather slightly warmer with less fog than San Francisco during the summer, and winters can be cooler.

It wasn't until 1983, 136 years after Lafayette's first citizen, Elam Brown, purchased the Rancho Acalanes land grant and donated a small triangular piece of land for a public plaza, that Lafayette citizens began to realize that the small triangular plaza, a .4 acre site on Brook Street and a couple of rundown ball fields were all that the city owned; and that the vast number of oak woodlands and creeks were actually privately owned and expendable. Today the Lafayette Parks system is much larger and continues to grow to keep up with demand.

Shopping, restaurants, gifts, grocery stores, gas stations and a pretty community park with a statue of Lafayette greet you to Lafayette.

The annual Lafayette Art & Wine Festival held in downtown Lafayette, California off Highway 24, west of the I-680/Highway 24 interchange is often held the third weekend in September. Produced by Lafayette Chamber of Commerce with support of the City of Lafayette, it features more than 300 fine arts and crafts booths, restaurants, food vendors, wineries and microbreweries. Continuous musical entertainment presented on three stages and a kids area with entertainment and activities plus a special exhibit and sale of work by local artists make this well attended event perhaps the most popular local event of the year.

Taste of Lafayette in May is an anticipated culinary extravaganza featuring samplings from around 25 restaurants and participants. It is also produced by the Lafayette Chamber of Commerce, lafayettechamber.org | tastes

For kids there's nothing more exciting than participating in Trick or Treat Street downtown. This Halloween celebration invites kids to don their costumes and visit merchants door to door for goodies to put in their treat bag.

Another tradition is Santa's Bag Boutique, a December shopping event at the Community Center. It's been around for more than 25 years!

Lafayette enjoys thousands of trees in wooded areas teaming with birds, raccoons, squirrels, deer and other small animals. Visitors can hike around the Lafayette Reservoir or participate in annual 10K run, held usually around late October. Sponsored by the City of Lafayette and Lafayette Chamber of Commerce, the event begins at Mt. Diablo Blvd. between First St. & Moraga Rd., heading west to El Nido Ranch Road, around the Lafayette Reservoir and back to Moraga Road.