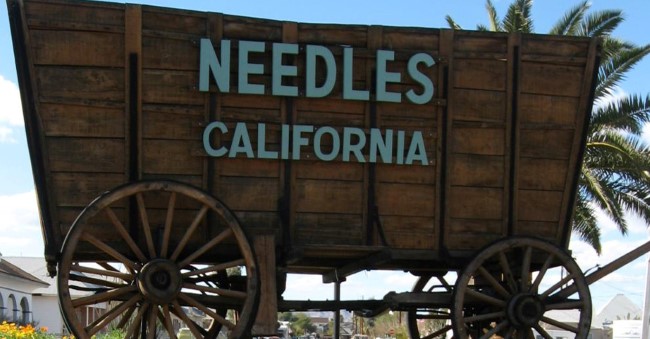 Needles, Calif.--How hot is it? The average daytime high in Needles during the summer is around 107 degrees, and often tops 120!

Located along the border of Arizona, Needles is a Mojave Desert city of approx. 6,000 people who work mostly in the casino over the state line at Laughlin 25 minutes by car, and at other jobs in or near Needles. Named for a group of rocks called The Needles across the border in Arizona, the city is the gateway to the Mojave National Preserve, which is open to the public.

Closer to home in Needles, life on the Colorado River provides local entertainment, things to see and do:

Mojave National Preserve protects approximately 1.6 million acres of desert habitat and was created by Congress in 1994. Located just west of Needles, visitors can observe ranching activities, historic and modern mining operations, through and around the "Hole in the Wall" area, and traverse the old Mojave Road as the Indians, soldiers and homesteaders did. Geologic features such as Cima Dome, the Cinder Cones, and the Kelso Dunes add to the visual attractions of the area. Animals such as Bighorn Sheep and desert tortoises may be observed in this scenic area. Camping is available at Mid Hills and the Hole in the Wall campgrounds. 760-255-8801.

Mitchell Caverns 60 miles west of Needles are limestone caves that feature stalactites, stalagmites, flow-stone and other formations of beauty and interest. Cavern tours, lasting a little more than an hour and requiring a 1.5 mile hike, are available daily, Open Year Round.

Topock Gorge - Topock Gorge is 17 miles South of Needles on the Colorado River and can be seen by boat or canoe.

Oatman - was a famous gold mining center. Burros walk freely throughout the town and there are mock old west gunfights. Includes shops & dining, and is 45 minutes Northwest of Needles.

Founded in 1883 as one of the oldest cities in San Bernardino County in the heart of the lower Colorado River recreation area across the bridge from Arizona near the tip of Nevada, the region is known as the Tri-state area.

In 1776, Father Francisco Garces was the first white man and it wasn't till more than a century later that Needles became a regular stop for the Santa Fe railroad serving as an icing station for the fruits and vegetables shipped east from California's fields and orchards.

Interstate 40 travels east to west, and Highway 95 (the Trans-National Highway from Mexico to Canada) provides north-south access. Amtrak provides two trains a day form Needles to Los Angeles, and Needles to Chicago. Greyhound Bus stops at the El Garces Hotel/Santa Fe Depot (listed in the National Registry of Historic Places) and namd for that first white visitor to the area. The fabled Route 66 (the "Mother Road") runs through downtown Needles.