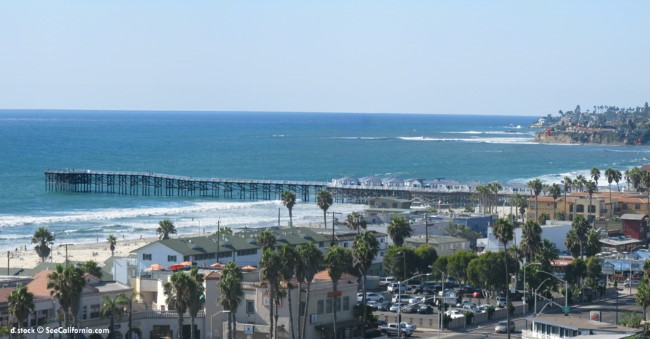 Pacific Beach is one of several beach regions or communities within the city of San Diego, the 2nd largest city in California. Because San Diego is so huge, it is not surprising that many local areas retain their own sense of community which includes signage, marketing districts, and special events signifying those regions by their name instead of San Diego's.

Several such places include the more recognized La Jolla which receives more name play because of its location slightly north of the city, Coronado, which is separated by the bay and connected by a bridge, and the beaches geographically closer to the downtown city bounds such as Pacific Beach, Mission Beach and Ocean Beach.

As California's top beach destination San Diego takes great care to allow the beach communities to empower local residents to help make improvements within guidelines, server the tourist audience, and foster a spirit of pride in the fact that the city is comprised of so many great neighborhoods and districts.

So what's the buzz that would make you want to see Pacific Beach?

Pacific Beach is surrounded by Mission Beach (home of the Roller Coaster, The Plunge and carnival rides,) Pacific Ocean to the west, Mission Bay to the east, and La Jolla to the north.

Pacific Beach has a Town Council that maintains an English Tudor cottage called Rose Creek Cottage at 2525 Garnet Ave. Rented for weddings and functions, this quaint and charming cottage was built not quite 100 years ago, but retains its charm like so many buildings of historic interest in San Diego.

Pacific Beach has numerous beach hotels, and probably the most hotels on or at the beach that provide tourists with the true essence of beach vaction living, thanks to the surfer scene, a youth hostel, bars, clubs and restaurants at the beach, and the local crowd that is energetic, tanned, and loves outdoors and sports. You can ride a bike, jog, surf, play volleyball, and participate in hundreds of activities throughout the year at "PB". This is an outdoor paradise of year-round sunny living.

Pacific Beach is similar to other communities swallowed up by their larger enveloping counter-part civic entities. Poised to become its own city when developed before the the 1900s, plots sold for building homes and the San Diego Union newspaper in 1887, proclaimed a new city was launched at False Bay, to become Mission Bay.

Pacific Beach could have followed the path to city-hood, but it was mostly a sleep farming community filled with lemon groves and an enjoyable ocean-front location. Crystal Pier was built in 1927 and hopes were that it would become an amusement attraction. The pier officially opened on the weekend of July 4th, 1927 with all of San Diego interested in seeing the Crystal Ballroom located at the end of the pier. Mission Beach had previously launched Belmont Park, known for its Giant Dipper roller coaster ride.

The Great Depression hit, and people had no money to pay for luxuries such as amusements and entertainment. The entire coastal amusement park craze bottomed out essentially, with only a few survivors remaining. Pacific Beach didn't make the cut, and never fulfilled the early vision to wow tourists with a carnival atmosphere and rides on the beach.

Pacific Beach Town Council incorporated in 1950 and functions currently as a representative for the interests of the community. Among its distinctions and interests are the area the beaches south of Crystal Pier that cover approx. two miles, becoming Mission Beach and then South Mission Beach, eventually ending at the channel entrance to Mission Bay. There's an area adjacent to the residential and commercial areas of the Pacific Beach and Mission Beach called The Strand.

Crystal Pier, a publicly accessible fishing pier and cement boardwalk parallels the entire beach. Along this strand you will find people walking, biking, and gazing at the shops, the beach and the people. Restaurants, beach rentals, and hotels line the coast. Access to Mission Beach is available via Mission Boulevard. Lifeguards are staffed daily year round at the main lifeguard station at the foot of Grand Avenue.

Lifeguards patrol the beach, usually beginning at 9 a.m. and leaving at dusk. They save lives, enforce regulations such as patrolling swimming and surfing areas, and place warning flags to notify of dangers in the ocean. Not considered a scuba diving location, head north to La Jolla for better scuba conditions.

Public restrooms and showers are located at the foot of Grand Avenue at the lifeguard station and in the median of Pacific Beach Drive between the boardwalk and Mission Boulevard. There are no public restrooms between Pacific Beach Drive and Mission Beach. The boardwalk is accessible to wheelchairs and provides an excellent view of the beach. Containers for beach fires are generally provided during summer months and available on a first come, first served basis. Alcoholic beverages are not allowed on the boardwalk, on or against the seawall, or in any park adjacent to the beach.

The beach area north of Crystal Pier extends approximately one mile from the north end of the community of Pacific Beach to the south end of the community of La Jolla. This beach is bordered by cliffs up to 75 feet in height. A sidewalk traverses the cliff-top along much of the south end of the beach. In this area, parking is very limited. At the north end of the beach is Tourmaline Surfing Park which includes a public parking lot and limited facilities. This area is heavily used by surfers and sailboarders year round. This beach has separate water areas reserved for swimming and surfing. Surfing is permitted at this beach. To see the updated rules & regulations for this beach and other San Diego beach communities, visit sandiego.gov