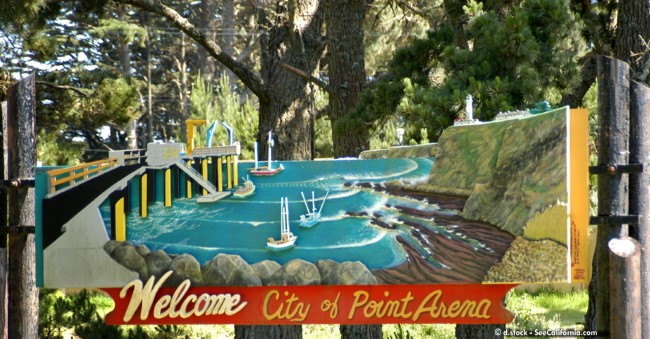 Point Arena is a small city on the California Coast in Mendocino County, located in the northern portion of the state.

As you drive along I-101 north from Gualala, Point Arena comes into view. From the south, you enter from the bottom of a hill and rise upward to to the city, beaches and Point Arena Lighthouse. The landscape contains wildflowers, daisies, irises and and variety of colorful plants that thrive in the north coast climate in the spring.

The southern part of town is where the fishing pier is located, and you'll often see an angler or two pulling up their boats, washing fish, cutting bait, and working away on the small pier. Arena Cove Pier with its floating dock for launch and retrieval of vessels, plus a dinghy and skiff hoist area, is small but efficient. The people who use it don't tend to linger, unless they encounter friends and hope to tell a few fish stories or shoot the breeze.

Signs often are posted providing information about the Laysan Albatross. Its breeding grounds are on the Hawaiian Islands, but it migrates to Point Arena coast some 2,5oo miles distance.

Up the hill from the pier is the The Wharf Masters Inn 785 Port Road Point Arena, CA 95468. The hotel is set into the hill, providing views of the Pacific Ocean and the wharf area. There is also a restaurant where you can eat.

If you're spending the night, check in and then go explore the town where you can shop in non-chain stores, enjoy the architecture over 100 years old seen in churches and local buildings, and drive over to the lighthouse. Point Arena Lighthouse is open daily (subject to change,) providing tours and admission for a small fee. There's a museum, tide pool aquarium, nature trail and gift store where you can pick purchase souvenirs.

Signs on the road warn of raccoons, and indeed, you'll often see the scavengers during your visit. There are not the shy guys, but are hungry and hopeful that humans will throw them a crumb or two.

Point Arena has around 500 people and though the town seems remote and out of the way, it's amazing how lucky these people are. They have beautiful beaches outside the doors of their homes or just blocks away, and there are lush fields, meadows and beautiful landscapes that inspire. The city also keeps busy with lots of health food options, community gatherings, coffee house entertainment, and special events held annually such as the Hog & Lamb BBQ to raise funds for the Redwood Coast Fire Department.

The beaches you must see during your visit are Schooner Gulch State Beach at the end of Schooner Gulch Road (3 miles south of town) where the road forks and you can also access Bowling Ball Beach named for the massive rocks eroded by the ocean to appear like large balls. Bowling Ball Beach is sometimes closed due to erosion. You can check out conditions at parks.ca.gov.

Point Arena got its name from a Spanish term which means 'sandbar'. It was actually called Barra de Arena which has later transformed into the name Point Arena. Its recent recorded history spans nearly half a millennium. To the south the Spaniards later would arrive in San Diego and began building missions to claim the territory for their king, but as early as 1543 a Spanish sailor and navigator, Bartolome Ferrelo, visited and gave Point Arena its first modern name, Cabo de Fortunas. It also went by the name Punta Delgado when Mexican Bodega y Cuadro visited 200 years later in the 1700's.

A coastal branch of the Central Pomo Indians between Navarro River and Gualala River inhabited the area when so many international travelers passed by with interest. Spanish, Russians, Mexicans and even Irishman John Galloway all came with interest, though Galloway actually stayed. He lived near Point Arena around Schooner Gulch between 1866 and 1868. The giant redwoods were seen at the time to provide an ideal source of wood for building and a milling operation for timber at Schooner Gulch was established, lasting into the late 1800's. Schooner Gulch may have been named for a schooner supposedly seen stranded on the beach at the mouth of the gulch one evening, yet gone the next morning.