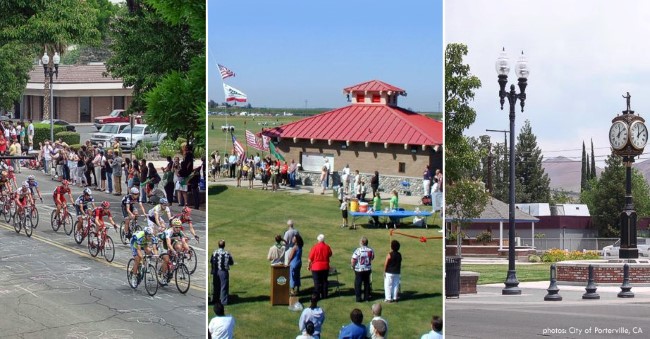 Porterville is located on the edge of California's Central Valley, where the mountains frame this region with their majestic redwoods recognized as the biggest trees in the world!

Home to Porterville Fair, a Tulare County highlight, the fair is one of the last true community fairs in California, formed from humble beginnings starting in the late 1940s. The annual Porterville Fair held in May is one of several events that focus on the region's agricultural assets. Several livestock and roundup events are also hosted in Porterville annually.

The Zalud House is one of the historic homes in Porterville that was transformed into a museum providing displays capturing the early days, clothing, furniture and lifestyle of Porterville residents beginning in 1891 when the charming brick house was constructed. Listed on the National Historical Registry of Old Houses and National Register of Historic Places, it is one of the few California structures that hasn't been remodeled and still maintains the unique mansard roof design. Lovely gardens host a variety of special events such as weddings and teas.

Located only 20 minutes by car to Springville, where Sequoia National Park begins, the beautiful outdoor opportunities are endless to explore the surroundings just outside Porterville!

Named for Porter Putnam who arrived in town in 1861, the city celebrated its sesquicentennial in 2011 with a list of enhancements ranging from Riverwalk Marketplace to Centennial Plaza, Orange Avenue Revitalization, Porterville Transit Center, Sports Complex and acquisition of new fairground facilities. With a population of around 50,000 as of this posting, Porterville has so much to enjoy and be proud of!