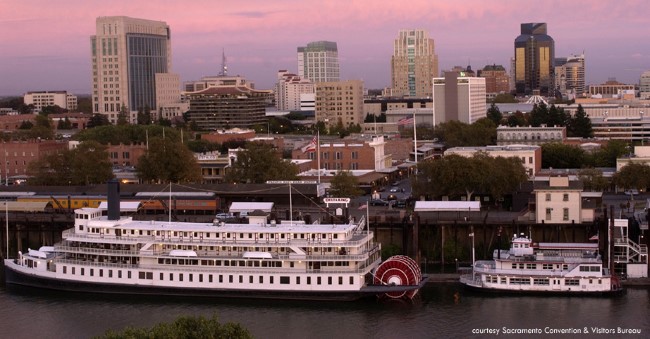 Sacramento, the California State Capitol city, isn't just about politics though the political scene certainly is a a driving force in what goes on in Sacramento. Tourists and business people do flock to see the Capitol Museum, or to speak with and lobby for particular causes.

F0r those who know and love Sacramento, it is a mecca of history and museums that include history, culture, trains, an historic Sutter's Fort State Park, and the living history of Old Sacramento along the river's edge.

Sacramento and its surroundings are part of a delta that includes lots of water and waterways, so boating is an important part of the local scene.

Highlights of Sacramento include its events, restaurants, museums, shops and centralized city where you can get around on public transportation. Beautiful churches and artfully restored homes in Sacramento provide a look and feel that the growing suburbs that surround the city lack.

When you go be sure to visit the State Capitol and tour the building. Highlights include hallways filled with display cases representing each county's contributions to California.

One of the unique museums that focuses on transportation is the California Auto Museum. It includes exhibitions that are interesting, and well worth a stop.

Other museums include seven historic state parks within the city bounds. They include the California State Capitol Museum, Sutter's Fort State Historic Park, California State Railroad Museum, Governor's Mansion, Leland Stanford Mansion, State Indian Museum and Old Sacramento State Historic Park, an entire shopping and dining region that is part of the original city center of Sacramento. This area is a walking, living museum unto itself. There are many things to see in "Old Sac" and many like to take photos with the Pony Express statue or take a horse drawn carriage ride.

Sacramento is called Camellia Capital of the World, and the best place to find camellias is surrounding the Capitol building on grounds that contain tons of camellias and trees from around the globe. The grounds also contain many military memorials.

Among the eclectic things to see and do, there's a One Man Band with music performed in a purple truck by a man named Winko.